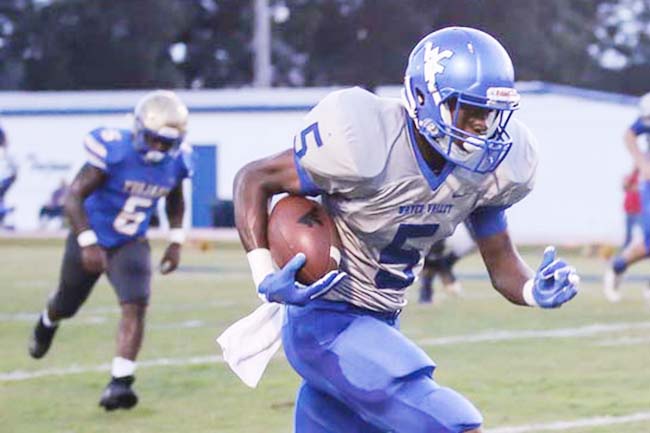 Water Valley has experienced plenty of success the first month of the season, but you would not know they were an undefeated team by watching at practice everyday.

The Blue Devils are sitting at 4-0 with two non-region games remaining before Region 2-3A play begins on Sept. 28. The four wins have been dominant and one-sided, yet fast start to the season has not gotten to the players’ heads.

A lot of that is due to the majority of juniors and seniors were freshman and sophomores on that 2016 team that went 2-9 and missed the playoffs.

“They know what it’s like to not win,” Water Valley head coach Brad Embry said. “They know what it’s like to win and not win. We’ve got a really good culture right now. We were winning 42-0 (last week), our young guys were in on defense and our old guys were down there cheering them on instead of kicked back on the bench. They wanted (the young guys) to play with the enthusiasm, the effort and the execution that they played with throughout the game. That’s one thing that you get rolling in a program it’s good. We’ve got that right now.”

Calhoun City (2-2) won the 2016 Class 2A state championship and reached the semifinals in last year’s playoffs. The Wildcats are always contenders for a state title or at the very least a deep run in the playoffs year-in-and-year-out, especially with head coach Perry Liles at the helm. Since 2010, Calhoun City has played in four state championship games.

“When I watch (Calhoun City) on film I think state championship,” Embry said. “To be honest with you, when I look at them playing in 2A, they’re super-talented. They’re fundamentally sound, they’re athletic and they’re really good in the weight room. That’s a pretty good combination.”

The Wildcats do not rely too heavily on their passing game, but junior quarterback Chardarius Hill has thrown for 85 yards and a touchdown, completing five of seven passes. Their biggest threat is the run game.

Senior Anfernee Campbell leads Calhoun City with 297 rushing yards and two touchdowns on 47 carries. Junior Hayden Goodson and freshman Red Balford have accounted for the other two touchdowns. Senior Jay Bailey is the only other Wildcat over 100 rushing yards with 115 on 15 carries.