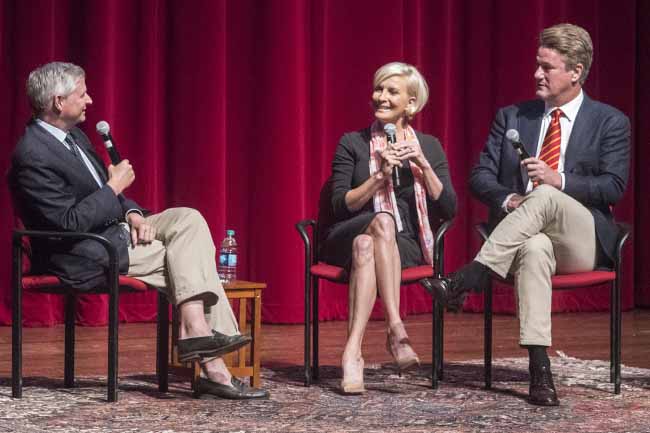 Jon Meacham, from left, talks with Mika Brzezinski and Joe Scarborough of MSNBC's Morning Joe during a question and answer session at the Ford Center, in Oxford, Miss. on Friday, September 14, 2018. (Bruce Newman, Oxford Eagle via AP)

The Gertrude Ford Center for the Performing Arts hosted NBC’s Joe Scarborough and Mika Brzezinski in a conversation with presidential historian Jon Meacham on Friday evening.

The “Morning Joe” stars and Meacham discussed the state of the country as it relates to President Trump, his relationship with the media and what it means in a historical context.

The “Trump Effect,” Meacham said, is the idea that the consequences of the President’s actions have a widespread – often negative – influence on the public. Both Scarborough and Brzezinski said they were well aware of the phenomenon, and cited examples of the moment they first realized its existence.

Scarborough said, in 10 years of knowing Trump, he’s never met anyone who was so obsessed about what the press thought about him. When Trump was still hosting The Apprentice in the early 2000s, Scarborough recalled multiple occasions when the now-President would fax the show’s ratings to him, with the attached message reading, “Look Joe, I’ve got the No. 1 show on television.”

However, he said, the show consistently ranked around No. 17.

“I think it was February 2017, where he was at an event and called the press ‘the enemy of the people.’ And that’s a Stalinist phrase. It’s been used by dictators, by demagogues… for decades now, to attack the press. It was such a potent weapon against political enemies that Khrushchev, after Stalin’s death, actually banned the use of the term in the Soviet Union,” Scarborough said. “But Donald Trump was using it. I think he’d just figured out he was not going to get a free pass from the press.”

Brzezinski recalled a more recent incident in which Trump started calling out an NBC reporter by name during campaign rallies. In that moment, she said, she felt real fear for reporters in America and realized deep-down the damaging potential of the “Trump Effect.”

Brzezinski also said viewing the Trump administration through the eyes of her father, Zbigniew Brzezinski, a Poland native and diplomat who witnessed the rise of Adolf Hitler, put things in perspective.

“I got a real dose of just how serious this can be from my own father on his deathbed. The discussions we had of Trump, which we had to stop having, were so disturbing to him, because for him, his entire life he had worked on strategic partnerships, on political relations,” Brzezinski said. “My father (and) my mother escaped Hitler. We only know what freedom feels like. So when you talk to someone who has that background, this is way not normal.”

However, Scarborough said, it’s important to not overreact, especially as members of the media. Citing several moments where he and Brzezinski became angry about something the President said, or an event that transpired, Scarborough said he meditates on the mantra, “We’re here to work, not war.”

He also stressed keeping things in perspective. Watching Ken Burns’ documentary on the Vietnam War – wherein 46 men were sent home in body bags a day – helps him and Brzezinski remind themselves that presidents have lied before and things have been worse. In the long run, he said, Trump’s political legacy will serve as a cautionary tale.

“We have to understand that the media bears a responsibility for people not trusting us. I say this as a conservative, no longer a Republican, but a conservative nonetheless,” Scarborough said. “We have got to keep our heads about us and go to work. It is not our job to decide whether Democrats or Republicans win the elections. That’s the voter’s job. It’s our job to speak truth.”