Edge and Thompson bring love of food, South to television with TrueSouth 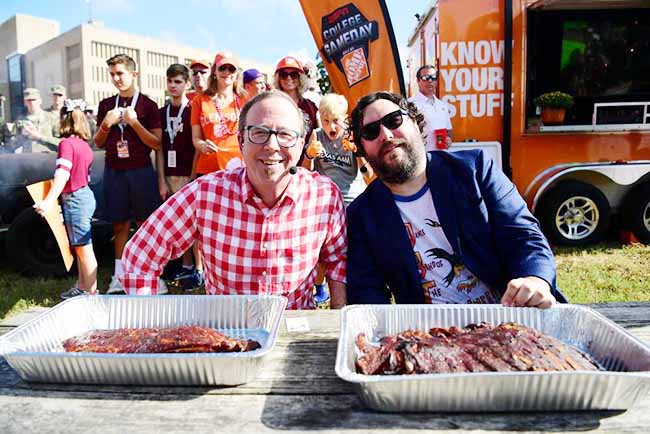 Fans of SEC football and Southern cuisine can tune in to SEC Network at 6 p.m. on Sept. 18 to see TrueSouth, a show celebrating Southern cuisine and its many facets and hosted by a couple familiar Oxford faces.

However, Edge said, it’s a match made in stereotype-defying heaven.

“What we hope to accomplish is embedded in the title, ‘TrueSouth.’ We want to tell honest stories about this region and use food as a way to get there.” Edge said. “Food is, along with music and along with football, quite frankly, one of the totems of Southern culture. It’s the way we express ourselves. It’s the way we tell people who we are.”

The show, which has four episodes this season, follows Edge across the region from Birmingham, Ala. to Nashville, Tenn. to Athens, Ga. to Shreveport, La. Each episode will feature two restaurants that serve as a cross-section of the city’s culinary offerings, Edge said.

For Thompson, who described the show as the “best job I’ve ever had,” TrueSouth is a chance to do something he and Edge had dreamt about for years. The pair live eight blocks from each other, and now that they get to explore together, Thompson said, he’s learning more than he thought possible.

“I’m sitting with a human truffle dog for restaurant finding,” Thompson said as the pair traveled to College Station, Texas last weekend for College Gameday. “I live on the road and my favorite thing about traveling is going to places, and I fancy myself as someone who finds the out-of-the-way place. We went to eight restaurants during this show, and I had never been to seven of them.”

The South is more than mint juleps and cornbread on the veranda, Edge said. It’s also a Malaysian-American owned Chinese restaurant in a motel by the interstate in Shreveport.

The aforementioned restaurant is Lucky Palace, owned by Quan Lim, whom Thompson described as a Bogart-esque host who’s created his own world in the midst of literal chaos. Signature dishes include a crispy ginger t-bone and duck over scallion pancakes, as well as traditional takeout mainstays.

“It’s about finding restaurants that matter to the community,” Edge said. “The kind of restaurants that are woven into the fabric of a city. Yeah, the food’s got to be great – but the narrative also has to be there.”

Morning Joe talks Trump Effect and the Media at…