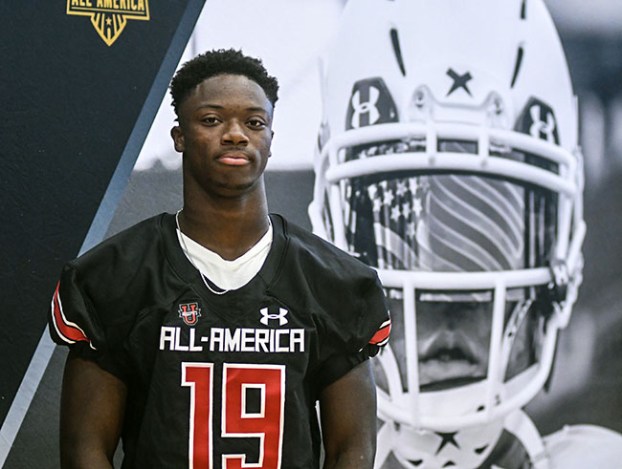 Lafayette High's Brandon Turnage has been selected to play in the Under Armour High School All-America Game. Turnage was presented a jersey during a ceremony in Oxford, Miss. on Monday, September 17, 2018. (Bruce Newman, Oxford Eagle via AP)

Brandon Turnage continues to get accolades for his play and the most recent one made Lafayette football history.

On Monday, surrounded by banners of Julio Jones and A.J. Green, Turnage was presented his jersey for the Under Armour All-American game at a ceremony inside the LHS gym.
The game will take place at Camping World Stadium in Orlando on Jan. 3 and will be televised on ESPN 2.

It is the second All-American selection for the Oxford-Lafayette community. Former Oxford, and current Ole Miss, wide receiver D.K. Metcalf was picked to play in the 2016 Army All-American game.

Leading up to the game, representatives go around the country as part of the American Family Insurance Selection Tour and visit close to 80 schools to present jerseys to seniors who are selected to the 100-player roster.

“It means a lot because it’s official now,” Turnage said. “I’m just really glad to compete with some of the top athletes in the nation. It’s a great opportunity and I can prove a lot of stuff to people.”

Even after missing all but a quarter and a half of his junior season due to injury, Turnage has been a highly sought after recruit for the 2019 class. Even without film from a season ago, Turnage has received offers from nearly every team in the Southeastern Conference and across the country.

Turnage is the first Lafayette player in program history to be selected as an Under Armour All-American. He was informed of his selection to the game earlier this year but was able to celebrate with the entire Lafayette High School student body present on Monday.

“What an honor,” Lafayette head coach Michael Fair said. “It’s just great. The thing I’m most proud about is not so much his athletic ability. We know he’s a great athlete, but it’s how he’s handled this whole process. Through recruiting, through the All-American stuff, he’s just as humble and as hard working as the first day I got here.”

Through the first four games of the season, Turnage has showed why he is so valuable on defense. He is second on the team in tackles with 27 (22 solo) and leads the team with three interceptions.

Fair has used Turnage on offense sparingly, due to having other weapons at his disposal this year, but Turnage has been effective when used. He leads the team with 88 receiving yards and has one touchdown.

Despite national signing day still three months away, Turnage is holding firm with his verbal commitment to Alabama. Barring any changes during the remainder of the season, Turnage plans to sign with the Crimson Tide in Dec.