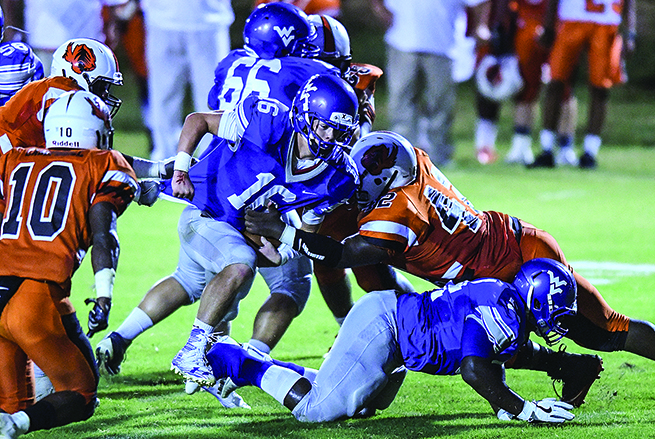 For most high schools, region play is here.

This week, all the preparation of building a non-region schedule worthy of getting teams ready for the rigors of region play will be put to the test.

But last week Oxford had one final tune-up while Water Valley showed they can handle the pressure of a close game.

Charged up
After a sluggish performance against Starkville last month, Oxford has rattled off three wins against Grenada, Lafayette and Pontotoc.

The defense has been the key to turning the Chargers (3-1) season back in the right direction. With three turnovers last Friday, the Oxford defense had a combined 10 takeaways against Grenada and Pontotoc. In the Crosstown Classic, Oxford held a potent Commodore offense that was averaging nearly 41 points to less than 30 two weeks ago.

Offensively, big numbers haven’t been put up in the stat sheet, but senior J.J. Pegues has been a constant.

Against Pontotoc, Pegues scored four touchdowns, following his two-touchdown performance against Lafayette. The play of quarterback John Meagher will have to continue its steady progression to help provide a steady balance to keep opposing offenses honest.

As they begin Region 1-6A this week, Oxford travels to Southaven.

The Blue Devils defeated Calhoun City by one point on Friday. It was the first game that was not decided by 26 points or more this season for Water Valley (5-0). The Blue Devils are also off to their best start since 2013, when they began the season 6-0.

The score was a one-point margin the entire second half with neither team scoring after halftime. While the scoreboard looked dramatic the game itself was anything but. The Blue Devil defense gave up a touchdown on Calhoun City’s opening drive but the Wildcats never threatened again, punting on every possession following the score.

The offense showed the same potent signs from the previous month but could never put the game away. A long touchdown was called back early in the game due to a holding penalty and running back Tay Rucker coughed up the ball later in the game on a promising drive that had Water Valley inside Calhoun City’s 35 yard-line.

There is one final dress rehearsal for the Blue Devils before entering 2-3A play. Water Valley hosts undfeated Winona on Friday.