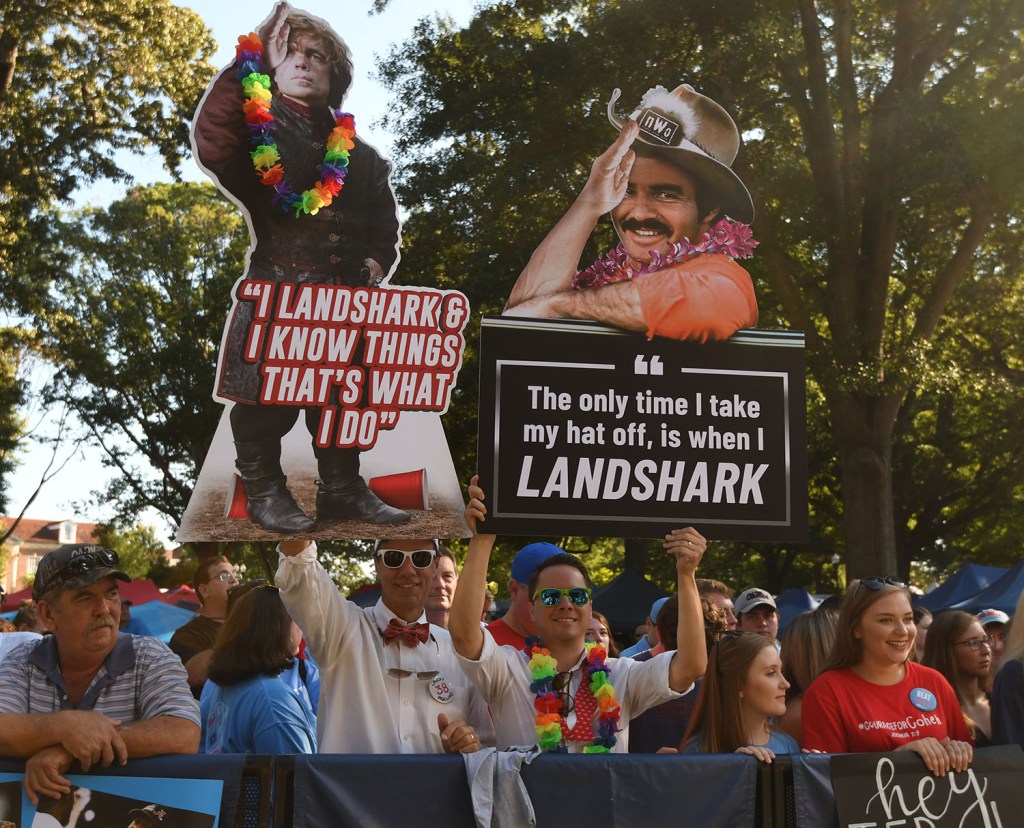 Fans hold signs as SEC Nation is broadcast from the Grove, in Oxford, Miss. on Saturday, Sept. 15, 2018. (Bruce Newman, Oxford Eagle via AP)

The Rebels may have faced defeat this weekend, but in the early morning hours Saturday, spirits were high as SEC Nation broadcast live from The Grove.

Cast members Paul Finebaum, Tim Tebow, Laura Rutledge and Marcus Spears went on air to discuss their picks and predictions for week three of SEC football. The crew was backed by hundreds of Ole Miss fans, and Crimson Tide devotees as well.

Allyn Flautt, a junior at the University, was front-and-center for the morning festivities with a group of friends. While she admitted she got to The Grove much earlier than usual for a 6 p.m. game, Flautt said it’s all part of being a committed Ole Miss fan.

“This is the only experience like this we’re going to get in college,” Flautt said. “Plus, Tim Tebow is here, so I’m hoping to meet him.”

The last time SEC Nation came to Oxford was in 2016, also for a matchup between Ole Miss and Alabama.

Many fans crowded the stage waving humorous signs that have become synonymous with classic rivalries. For Jack Darden and his friends, commitment to the game meant more than a piece of poster board. The trio was decked out in head-to-toe gear in solidarity with Ole Miss’ Nasty Wide Outs moniker, complete with a replica championship belt.

Amidst all the fans, however, The Grove was full of families, with toddlers running around before the crowds really set in on the 10-acre Grove and 4-acre Circle.

Bobby Stolts, a self-described lifelong Rebel fan, said his family had been coming to The Grove for years. Now that his daughter is a student at Ole Miss, he said, the family couldn’t pass up the opportunity to keep tailgating together.

“We planned this all week. We watch SEC Nation every week and it brings us closer together,” Stolts said. “My daughter goes to school here… it’s a family thing for us. We’re going to stay the entire day – all day and the game tonight.”

Next week, the Rebels will face the Kent State Golden Flashes at Vaught-Hemingway Stadium at 11 a.m.

Morning Joe talks Trump Effect and the Media at…