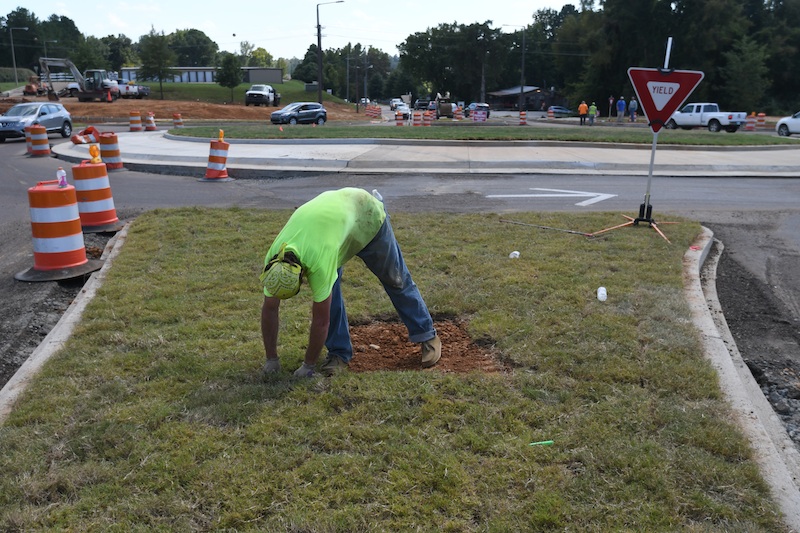 Heath Naramore installs sod at the roundabout at the intersection of South Lamar and Belk Blvd. in Oxford, Miss. on Tuesday, September 18, 2018. (Bruce Newman, Oxford Eagle via AP)

Construction progress on the new roundabout at South Lamar Boulevard hit a speed bump this week, which will result in a two-day closure of the corridor on Sept. 29 and 30.

Chancellor Bros. Construction, the company contracted to complete the project, sent a letter to assistant city engineer Reanna Mayoral on Sept. 13 requesting to close that portion of the road after realizing a grading issue at the beginning of the roundabout. Mayoral said City officials had visited the site themselves to help determine other options, but ultimately decided the weekend closure would be the safest and most opportune time.

“In order to correct (the grading issue), they have to remove all the pavement and part of the gravel and dirt underneath,” Mayoral said. “Because of where it’s located at the very beginning of the roundabout, there is no way, really, to maintain traffic through there with flagging.”

The City’s official position is that it’s not endorsing the use of any private property as means to detour around the roundabout during the closure, according to discussion in Tuesday’s meeting of the Oxford Board of Aldermen. However, Alderman Janice Antonow, whose own daily commute will be affected by the closure, requested Mayoral ask the University to reopen a back road behind the old hospital building as means of a bypass.

The roundabout is funded Baptist Memorial Hospital-North Mississippi, as it is the last phase of construction for the new facility. The project was originally announced as a 210-day contract during a pre-construction conference held Feb. 28. The contract date ends on Oct. 15. As of Tuesday night, it was not specified whether this closure would impact the completion date.

While it may seem inconvenient to close one of Oxford’s busiest corridors, Alderman Mark Huelse said the decision seemed to be a necessary evil.

“Either way, it looks like we’re going to have to do this, and the sooner the better,” Huelse said. “I go through that intersection a lot, and… I know it’ll be a hard weekend but we’ve got to do it.”

Another road closure was approved by the Board of Aldermen on Tuesday. This Thursday at 5 a.m., a portion of Jackson Avenue in front of the Uncommon Oxford apartment building will be closed in order for work crews to use a crane to install HVAC units on the building’s rooftop. The project is expected to last 30 minutes, but Alderman Jason Bailey requested crewmembers work expediently to ensure the road is reopened by 6 a.m.