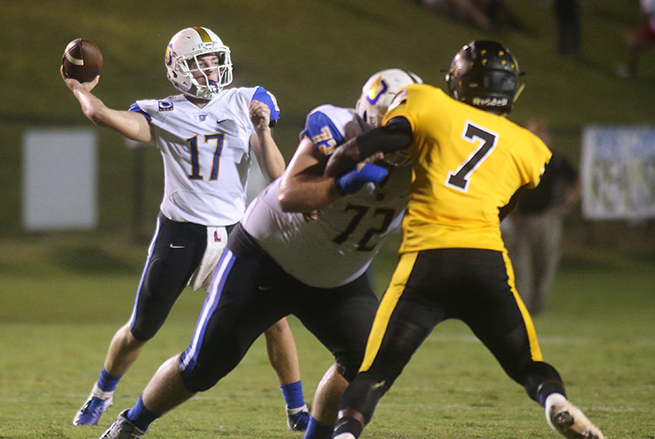 Oxford High's John Meagher passes against Potototoc at The Hollow in Pontotoc, Miss. on Friday, September 14, 2018.

Following their 56-7 loss to Starkville four weeks ago, Oxford could have packed it in and just hoped for the best. Instead, they chose to learn from it and went on to win their next three games, providing some momentum as they head into the only portion of the schedule that matters.

Region 1-6A play begins this week as the Chargers travel to Southaven on Friday (7 p.m., 95.5 FM).
With wins over Grenada, Lafayette and Pontotoc, there is much for Oxford (3-1) to hang their hat on after turning their season around.

“I think we’ve done a good job of getting better over the course of those four non-region games,” Oxford head coach Chris Cutcliffe said. “We have a lot of guys starting this year for the first time and taking snaps for the first time this year. We’re really asking those guys to go out and improve each and every week and I think we did that in a lot of spots.”

The Chargers find themselves in the same spot they did last year when the entered 6A region play for the first time. They dropped the game at Starkville then commenced to win their next three. This year they lost at home to Starkville and went on a three-game winning streak.

The only outcome they hope is different is this week. Oxford got off on the wrong foot in region play with a 23-13 loss at home to Southaven then followed it up with a 14-0 loss to South Panola. Those two wins were enough to keep the Chargers on the outside looking in, despite going 4-1 the final five weeks.

“We definitely addressed that (this week),” Cutcliffe said. “We start 0-2 in the region and we weren’t able to climb out of that hole even though we finished the season playing better and went on a four-game winning streak in the division. It wasn’t enough to climb out of the hole we dug. We definitely have addressed that this week that we want to start out as well as we can to position ourselves for playoff season.”

On the other sideline, Southaven (1-3) has had an identical start to their season as last year. The Chargers are coming off a 44-14 loss to Germantown (Tenn.). Their lone win of the season was a 20-7 win over Germantown on Aug. 31.

Last year, the Chargers turned their season around with wins over Oxford and Hernando to begin region play, helping them edge Oxford for the fourth seed out of 1-6A.

“They are very, very fast,” Cutcliffe said of Southaven. “I think they’re as fast of a team we’ll see and they seem to be that way every year. They have a lot of guys on offense who can hurt you with their speed. When you play someone with that kind of speed you better execute because they can make you pay big time”