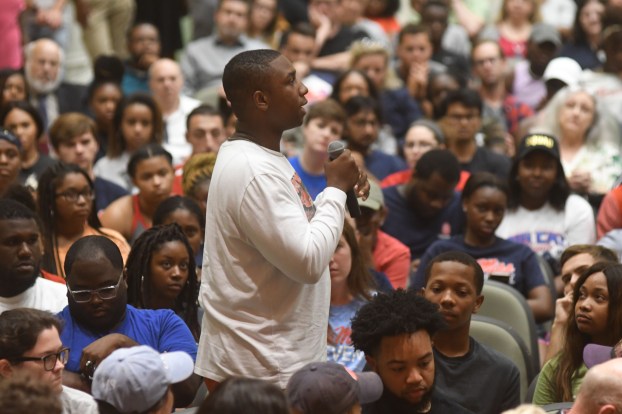 Malik McIntyre speaks during a University of Mississippi listening session concerning a facebook post by Ed Meek, a donor whose name is on the journalism school building, at Nutt Auditorium in Oxford, Miss. on Thursday, September 20, 2018.

Listen and learn: UM students speak up about Meek controversy

Students of the Meek School of Journalism and New Media and community members were given the opportunity to express their thoughts on a Facebook post by the school’s namesake, Ed Meek, directly to senior administrators of the University of Mississippi during a listening session Thursday night.
Meek posted the status calling for action after a series of filmed fistfights brought attention to late-night activities on the Square. Attached to the post were two candid photos of African-American women. It’s an action many students, UM Chancellor Jeffrey Vitter and members of the community have said exhibited “highly offensive” racial undertones.
“This last 24 hours have been incredibly difficult ones for the University,” Vitter said in his address to the audience. “…The question is, what do we do? How do we deal with this going forward? …We have important decisions to make. And we’re going to do that in a very thoughtful, intentional way.”
Nutt Auditorium was filled to capacity, with standing room only and many students waiting to speak their minds and offer potential solutions to the issue at hand. Almost every student who spoke called for the University to remove Meek’s name from the journalism school building.
One student in particular, longtime Oxford resident Andrea Hightower, said she was wary of Vitter’s promise of a “thoughtful, intentional” process for handling the situation.
“Chancellor Vitter, you’ve talked about an intentional and thoughtful process,” Hightower said. “I hope by intentional and thoughtful, you do not mean ‘slow enough to where we’ll hope that it fades.’”
Many African-American students spoke about their experiences on campus, from being the only person of color in a classroom to the discomfort felt by walking past Confederate monuments and buildings built by enslaved people.
Malik McIntyre, a UM journalism student and DJ for Rebel Radio, said Meek’s actions perpetuate the University’s storied past when it comes to issues of race. However, McIntyre said it’s not too late to make a change.
“Ed Meek is old. He might not change,” McIntyre said. “But the students? We can change a lot.”
The meeting, which lasted more than three hours total, was divided into two parts: one exclusively for Meek School students and the other for community members. Elected officials from the City of Oxford and Lafayette County were in attendance, as well as faculty members from the Meek School of Journalism and New Media.
Graduate students were also in attendance. Jordan Richardson, who has been at the University since 2012, said he’s seen real change over the last six years, with the Mississippi state flag removal and the removal of Colonel Reb. However, Richardson said he understands and appreciates the efforts of African-American students who choose to come to Ole Miss in spite of its history.
“To my black brothers and sisters, every feeling you may be feeling today, as you come into this room, as you woke up this morning and saw that Facebook post, is 100 percent valid,” Richardson said. “The fear you had when your mother said, ‘Are you sure you want to go to that campus? Why don’t you go to Jackson State? There’s a place for you there.’ But you find yourself here on this campus today making this campus a better place, a more diverse and hopeful place.”

The inaugural Clear Creek Music and Arts Festival will take place this weekend at the Satterfield Pottery studio grounds. A... read more