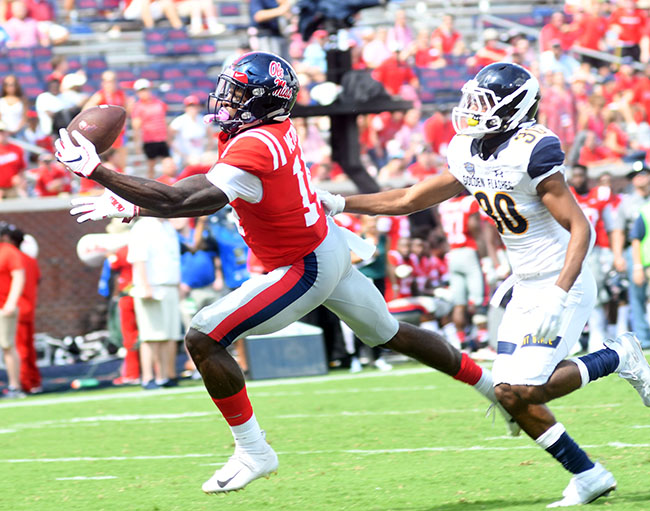 If there was any hangover from No. 1 Alabama, it took about three quarters for the Ole Miss offense to shake it off. In between two rain delays, the Rebels defeated Kent State 38-17 at Vaught-Hemingway Stadium on Saturday.

The nation’s 34th best offense struggled against the 108th worst defense for three quarters. The Rebels (3-1) were held to one touchdown in the first half, a 38-yard catch by running back Scottie Phillips. Their last five drives of the half resulted in four punts and a blocked field goal attempt.

Jordan Ta’amu and the offense picked things up in the second half with four touchdowns and a field goal.

Ta’amu finished with 442 yards and two touchdowns. He also threw an interception in the third quarter.

Scottie Phillips had his third 100-yard game of the season with 112 yards and a touchdown on 19 carries. Pearl freshman Tylan Knight saw action, rushing for 62 yards on six carries.

D.K. Metcalf led the receiving corps with 102 yards and a touchdown on 7 catches. Metcalf made a highlight reel catch of 41 yards for his score and nearly had two touchdowns on the day, but offsetting penalties negated the second touchdown.

The game was tied at 7-all at halftime due to Kent State (1-3), scoring on a trick play late in the second quarter. Quarterback Woody Barrett threw the ball to wide receiver to Kavius Price to running back Jo-El Shaw for an 18-yard touchdown pass.

After last week’s performance against Alabama the Ole Miss defense had a better showing, holding an opposing team to under 400 yards for the first time this season. They finished with seven sacks and two takeaways.

The game was tied at 7-all at halftime due to Kent State scoring on a trick play late in the second quarter. Barrett threw the ball to wide receiver to Kavius Price to running back Jo-El Shaw for an 18-yard touchdown pass.

It was the first time in 23 games the defense held a team to under 21 points.

Weather became a factor during halftime, causing a 53-minute delay. The second stoppage of play came with 9:25 remaining when more rain and lightning moved in, halting play for another 103 minutes.

Ole Miss hits the road next week, traveling to No. 6 LSU for an 8:15 p.m. CT kickoff at Death Valley.