Ole Miss vs. Kent State live updates, score: Rebels pull away in the second half 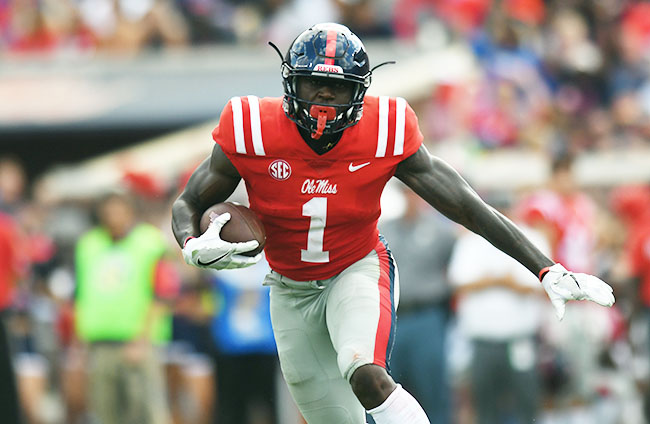 Ole Miss hosts Kent State at 11 a.m. (SEC Network) in the first meeting between the two teams. The Rebels (2-1) are looking to bounce back after their 62-7 loss to Alabama in their SEC opener last week. Kent State is coming off a 63-10 loss at No. 10 Penn State.

The Rebels resumed play with the ball at the Kent State 34 – the last play before stoppage was a fumble recovery by Zedrick Woods. Isiah Woullard scores on a 7-yard run to put this nearly out of reach for Kent State. Ole Miss 38, Kent State 17 7:06 4Q

We have entered our second weather delay of the game. Updated time of resumption not yet known.

After 14 points were scored in the first two quarters, there has been 24 points scored in less than 9 minutes of the third quarter. Barrett scores on a 2-yard run. Ole Miss’ lead back to four. Ole Miss 21, Kent State 17 6:45 3Q.

Kent State got inside the Rebels’ 20 yard-line thanks to a personal foul penalty called on Zedrick Woods. The Golden Flashes are then backed up after a sack on Barrett. Matthew Trickett converts a 32-yards field goal try. Ole Miss 14, Kent State 10 11:00 3Q

After a lengthy weather delay during and following hafltime the game resumed at 1:30 p.m. CT. Ole Miss starts the second half with the ball.

The offense gets going on the ground with big runs by Scottie Phillips and a 41-yard run by freshman Tylan Knight. The drive stalls and Luke Logan’s 38-yard field goal try is blocked. Ole Miss 7, Kent State 7 1:16 2Q

Ole Miss’ defense has seven sacks this half but Kent State still able to move the ball downfield. The Golden Flashes were inside the Rebels’ red zone but a pair of sacks and a penalty pushed them out of field goal range. Ole Miss 7, Kent State 7 4:12 2Q

Kent State went for it on 4 & 16 at the Rebel 34 for a turnover on downs. The Rebels then follow it up with a three and out.

The Rebels had a touchdown but was taken away with their second offensive pass interference negated it. The Rebels forced to punt.

Ole Miss’s drive stalled at midfield and the Rebels had to punt for the first time today. The Rebel defense did their job with a tackle for a loss followed by two sack, causing a Kent State punt. Ole Miss 7, Kent State 0 5:03 1Q

Ole Miss goes 77 yards in 6 plays on their opening drive. Jordan Ta’amu hit Scottie Phillips for a 38-yard touchdown catch. Ta’amu kept the drive alive with a 4-yard rush to avoid a sack and picked up a first down. Ole Miss 7, Kent State 0 11:20 1Q

Kent State won the toss and received the football first. Ole Miss’ defense got a stop on the opening drive and the Golden Flashes punted.