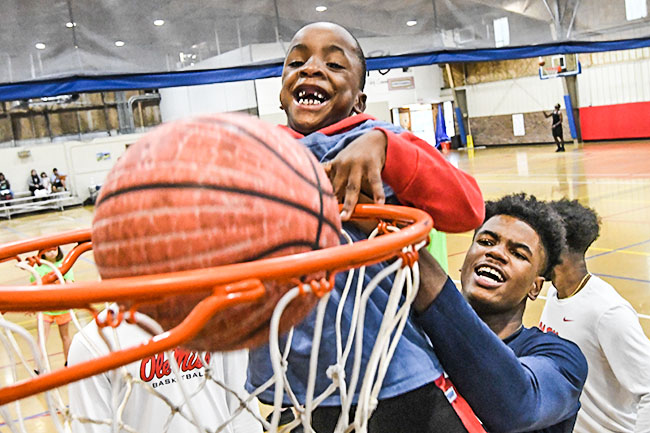 The Ole Miss men’s basketball team provided a lifetime of memories on Monday.

The Oxford Park Commission’s League of Champions got a visit from the Rebels at their activity center and were able to play with some of their heroes.

The League of Champions is OPC’s way to provide children and adults with special needs the ability to play sports which they are not able to elsewhere. Basketball is the current sport for the league to play, and several Rebels came over to lend a hand.

“It is awesome because everybody doesn’t get that opportunity,” OPC recreation director Felisa Bonner said. “They came to see a group of special needs kids and everybody’s not as comfortable (with it), but the guys got right in and just started playing with the kids. They loved it.”

Bonner oversees the League of Champions, as well as Special Olympics for OPC.

Members of the basketball team spent an hour running drills on one court, including a dunk competition, while the real action took place on the second court. A full-court game was held with League of Champion participants while Ole Miss players served as coaches and center Dominick Olejniczak played the role of referee.

“It means a lot because if we show support over here they’re going to show support to us,” Olejniczak said. “It’s also just good because you can tell it means so much for them. It’s just great to do things like this.”

The partnership between League of Champions and Ole Miss will extend beyond the basketball court. Ole Miss’ baseball and softball teams have agreed to lend a hand with their respective sports and Bonner is trying to get something set up with the soccer team.

“Having (Ole Miss) as a resource is awesome,” Bonner said. “It was a success.”