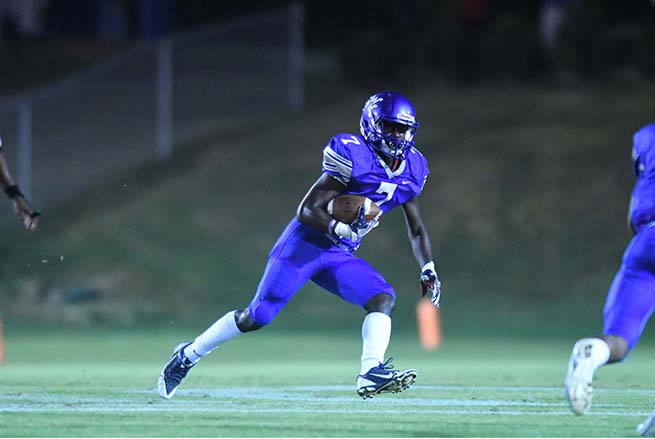 Brad Embry didn’t sleep much this weekend. The Blue Devils suffered their first loss of the season, a 21-20 defeat at the hands of Winona. It was a loss that bothered everyone from the managers to the coaching staff.

Facing their first bit of adversity this season could be coming at an opportune time for Water Valley, who begins their Region 2-3A schedule this week.

“I told the guys I thought we played good, hustled good, executed good. But you don’t win those games by being good,” Embry said. “I think (Winona) is a state championship-caliber football and we’ve got to play better than that. …I believe we have much more potential than that.”

Embry and his staff went back to the drawing board on Sunday looking to correct the mistakes made against Winona, including the six turnovers the Blue Devils (5-1) had. The players showed up to work on Sunday, hitting the weight room and studying film. The emotion of their first loss lingered all weekend.

“They were upset, aggravated after the game on Friday,” Embry said. “That’s good. I was too. I didn’t sleep much this weekend. But, the thing you better do is you better look in the mirror, individually, and see what we can do to fix the problems that occurred.”

Receiving the first blemish on the season came at the right time. The first six games of Water Valley’s season have no bearing on their playoff fate, but the next five games will. It starts on Friday at a Holly Springs, a team that has found a renewed offense.

The Holly Springs offense is averaging 42.3 points per game and their margin of victory has been 41.2 points.

“Offensively, (Holly Springs) has been putting up a lot of points,” Embry said. “It’s a lot of the same kids (from last year). They’re good athletes. …We’ve got to go to their place and be better than them. So, it won’t be easy.”

Sophomore quarterback Dylan King runs the Hawks’ offense, throwing for 831 yards, 15 touchdowns and six interceptions. King is also the second-best rusher on the team with 143 yards and three touchdowns on 26 carries. Junior Kadarreon Lumpkin leads the team with 878 rushing yards and 11 touchdowns. He also has four games of at least 100 yards on the ground.