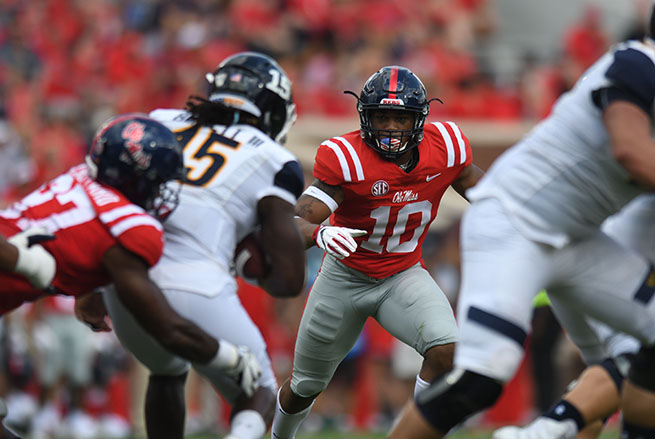 Jacquez Jones is adjusting to life as a college football player in the Southeastern Conference, but is doing so at a quicker pace than most freshmen.

Four weeks into his collegiate career, Jones has played in all four games at middle linebacker.

Playing the games is not the biggest issue for the Tuscaloosa native. It is learning to adjust to the preparation during the week.

“It’s taking time to get adjusted, but things are going well,” Jones said. “The biggest adjustment is staying on film. In high school you just go out there and play, but now you actually got to study film to get you prepared for the game.”

Through four games, Jones has racked up 18 tackles, half a sack and forced one fumble.

Jones is part of the young linebacker corps that include freshmen Kevontae’ Ruggs and Josh Clarke along with sophomore Mohamed Sanogo. When Jones was being recruited he knew there would be an opportunity to get on the field early in his career, especially at the linebacker position.

Jones’ familiarity and friendship with Ruggs is another factor that has helped him adjust. Both players are true freshmen who practice in the same skill group.
They also knew one another before enrolling at Ole Miss.

“We’re both from Alabama and we both played in the (MS-AL) all-star game. So we’ve played with each other before,” Jones said. “When we’re out there we kind of have chemistry. So, we know what each other’s going to do.”

Not only has Jones been able to lean on fellow freshman but he has also picked the brain from veteran linebackers such as senior Detric Bing-Dukes.

A product of Hillcrest High School, Jones got a small taste of how a college defense would run. Hillcrest head coach Sam Adams played at Auburn and was a graduate assistant under Tommy Tuberville from 2000-02. Adams has used what he learned at all his coaching stops including Hoover and Hillcrest.

Jones has gotten his first experience against an elite SEC team in Alabama, but this Saturday will be his first test outside of Vaught-Hemingway Stadium, playing inside Tiger Stadium at night against No. 5 LSU (8:15 p.m. ESPN).