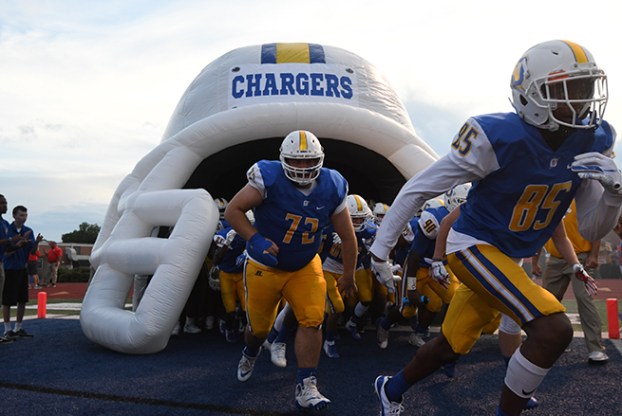 If there were any questions regarding the mental makeup of the Chargers, last weekend answered them.

After traveling to Southaven on Friday, Mother Nature again interfered.

The teams’ Region 1-6A opener was postponed to Saturday, 20 hours later.

While Oxford had yet to begin their pre-game routine, the experience was still taxing. On a humid evening, and faced with a warm locker room, the coaches rotated players onto buses to provide air conditioning.

After officials called the game on Friday, Oxford returned Saturday afternoon to an unusual environment — there were few fans and neither school’s bands were in attendance — and defeated Southaven 30-7.

The win gave Oxford (4-1) their first 1-0 start in 1-6A play, avenging their loss to Southaven in last year’s region opener. It was also their fourth straight win after losing to Starkville on Aug. 24.

The Chargers defense is a big reason for the current win streak. Since giving up 56 points to the Yellowjackets, Oxford has held opposing offenses to 11.5 points per game with one shutout coming against Grenada.

The defense was an area of concern for the Chargers as they entered the season with the loss of production from Quentin Wilfawn and others mixed with a lot of youth on that side of the ball.
The past three weeks have also been an adjustment period for the defensive line who is without Lamarcus Faulkner. The senior suffered a season-ending injury involving his ACL and MCL that required surgery.

“We knew that we had a lot of new faces (on defense),” Cutcliffe said. “We knew we had a lot of guys who were going to have to play through some mistakes, learn some lessons the hard way and just get thrown in the fire a little bit. We’re not where we want to be yet, but I think were getting closer every single day on the practice field and every week.”

Now, Oxford must try and maintain their momentum against South Panola. The Tigers’ record (2-4, 0-1 1-6A) could be a bit misleading after their non-region schedule.

South Panola played No. 10 Clinton and No. 5 Brandon to open the season in back-to-back weeks and also capped their non-region schedule with a game against Memphis University School, all losses.

“I think they’ve played maybe the toughest schedule in the state,” Cutcliffe said of South Panola. “I definitely think (their record) is not an indicator of who they are as a team by any means. They do a good job of challenging themselves in the non-region games. It reminds me of us, the same kind of concept. They want to play a tough non-region schedule.”

When CeCe Kizer scored her second goal of the afternoon in Auburn on Sunday a weight was lifted off her... read more