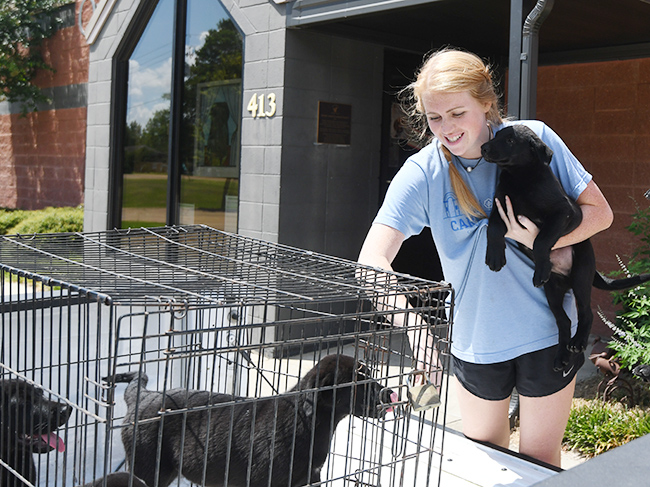 Oxford-Lafayette Humane Society is making its final preparations before the organization vacates the animal shelter building on Sept. 30.

OLHS communications and outreach manager Calyn Hoerner said, while the shelter has seen a decrease in intake since its Aug. 7 closure announcement, animals have been either surrendered during working hours or abandoned overnight as recently as this week. Thankfully, however, Hoerner said OLHS is actively working to place the animals as soon as possible.

“(Tuesday) we had a litter of seven puppies brought to us, and then a group of cats along with two small dogs were dumped overnight behind the shelter,” Hoerner said. “It happens more often than I thought it would when I first started here, and I think, with us closing, it puts more pressure on people than normal, because they don’t want to look us in the eye and surrender an animal when they know we’re closing.”

In addition to the seven puppies, there are also six older dogs remaining at the shelter: Aaron, Andy, Anna, Blair, Tito and Mabel. Duffy, a great dane, is also an OLHS charge, but remains in foster care.

Some of the dogs will be transferred to a shelter in West Virginia that is in need of shelter dogs, something Hoerner said she found surprising when she first started working at OLHS.

“We are coordinating with local rescues, and then Grace, our shelter manager, is driving a beagle litter that’s currently in foster care and, hopefully, (the seven puppies) and a few adult dogs to a shelter in West Virginia that we’ve worked with in the past,” she said. “When I did my first transport, it amazed me that these shelters are asking for our dogs, because they don’t have any because of their spay and neuter laws.”

One of the main reasons OLHS chose to vacate the city animal shelter building is to establish a free or low-cost spay-and-neuter clinic for animals in the LOU community. While she said she wasn’t sure when the clinic would be up and running, Hoerner said it’s an issue that’s left the community in dire need.

“They’re going to work (on creating the low-cost spay and neuter clinic) as quickly as possible on that. What the board is trying to do, is get to the root of the problem,” Hoerner said. “I think one of the biggest issues in the LOU community is spay and neuter. When we contract with these shelters up north and bring our dogs there, they have a lack of shelter dogs. They’re actively seeking because their spay-and-neuter laws are so strict.”

OLHS is celebrating its last day this Sunday at 2 p.m. with a Party in the Park, to honor donors and those who have adopted shelter animals. The event will take place in the City dog park next to the shelter building.