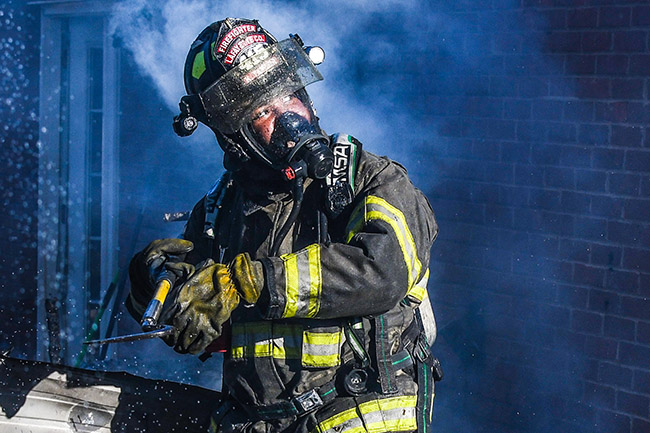 Lafayette County fireman Kaveon Taylor is the department’s fireman of the year.

Taylor, a Cleveland, Miss.-native, has been a member of LCSD for three years while attending the University of Mississippi as a public policy leadership major at the Trent Lott Institute. The college senior said, while it’s sometimes difficult to balance both academics and his passion for firefighting, he always seems to make it work.

Taylor said his love for fire-fighting began at age 15, when a friend jokingly asked if he’d like to be a junior firefighter in Baldwin County, Miss.

However, he said, he took that as a challenge and brought the application to his mother. She agreed, and he’s been frequenting the firehouse ever since.

“I never had any desire, as a child, to become a firefighter, but one of my friends asked me jokingly and I said yes. I thought it’d be cool,” Taylor said. “When I started, I realized how important this job is. I fell in love with it, and now I can’t stop; it’s like an addiction.”

It’s not uncommon for firefighters to drop everything and rush to the scene when they’re called, Taylor said.

One memorable instance, he said, involved a car accident in which a driver had a medical episode on Highway 6 West, toward Batesville. The vehicle landed in a drop-off and caught fire, but the driver was able to crawl out and was lying next to the vehicle.

“I was at Auto Zone near Highway 6, so I was rapidly able to get there. When I got there, people started screaming, ‘Hey, he’s still in the vehicle,’” Taylor said. “So me and another firefighter ran down there and were able to pick this guy up and literally bring him away from the burning vehicle.”

As someone who plans on pursuing a law degree, Taylor said his time as a firefighter has prepared him for any challenges that may come his way. While he’s in law school, Taylor has no plans to step away from the fire station.

“The friendships and the knowledge I’ve gained from listening to all of the other firefighters is something I feel can’t be learned and can’t be gotten anywhere else,” Taylor said. “Two people who mean a lot to me are Jamie Phillips, from Lafayette County, and James Winston, from back home. I can still call him, after a tough call, and he’ll get me right.”