Ole Miss struggles in loss to No. 5 LSU 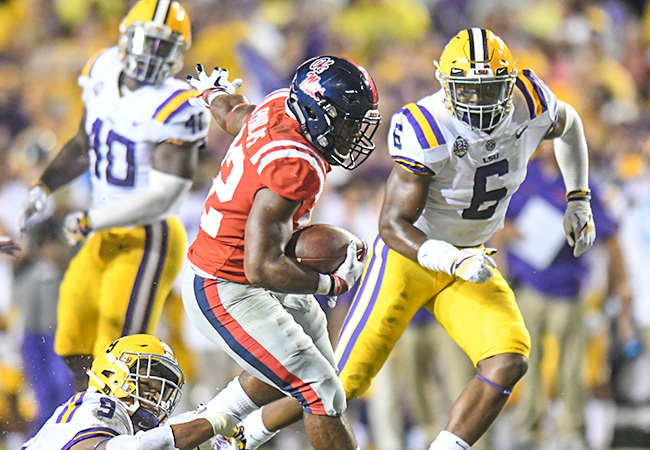 No. 5 LSU is a good football team on their own and Ole Miss did not need to give them any help, yet they did anyway.

The Rebels provided assistance with poor defense and over 160 yards in penalties in their 45-16 loss to LSU at Tiger Stadium in Baton Rouge, La. on Saturday night.

The night got off to a rocky start two plays in for the Rebels. Jordan Ta’amu threw his only interception of the game when Tigers’ safety Grant Deplit picked off the pass. The offense became stagnant the rest of the first half.

Two field goals by Luke Logan were the only points the Rebels scored in the first half.

LSU had the opposite result in the first half, offensively. After missing a field goal attempt on their opening possession, the Tigers scored touchdowns on their next four drives for a 28-6 halftime lead.

The Rebel defense held LSU to 17 points in the second half, but they could only muster a touchdown and a third field goal late.

Ta’amu finished with 178 yards and the interception.

The other 150 of the Rebels’ 328 total yards of offense came on the ground. Scottie Phillips had a team-high 96 yards and a touchdown on 16 carries. Ta’amu had 25 yards on 8 carries.

Ohio State transfer Joe Burrow had his best game as a Tiger on Saturday. The quarterback had thrown for 3 touchdowns in his first four games with LSU. Against Ole Miss’ porous defense he threw for 3 more and 292 yards.

The biggest and most glaring issue for the Rebels on Saturday was their 17 penalties totaling 167 yards. Many of the flags were for personal fouls or unsportsmanlike conduct, helping to extend LSU drives on several occasions.

The Rebels return home next weekend for Homecoming when they host ULM at 3 p.m. CT (SEC Network). It is their final non-conference game before ending the season with six straight SEC games.