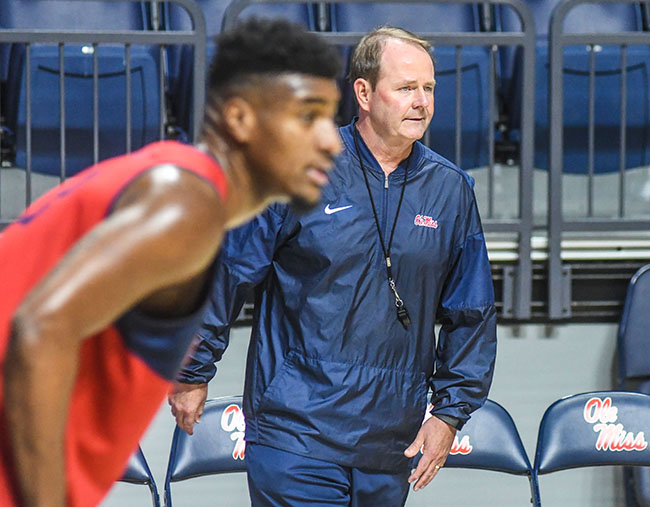 Kermit Davis is entering his 37th season in college basketball and with every new season comes reflection, looking back on his first head-coaching job at Southwest Mississippi Community College.

A lot has changed for Davis since 1984 but the biggest is taking over a Power-5 program for the first time in his career.

Ole Miss opened the 2018-19 season with their first practice on Monday, marking the beginning of the Kermit Davis era. Davis is replacing Andy Kennedy who stepped down as head coach last season after 12 years.

Davis bided his time, waiting for the right opportunity to move up to a Power-5 team. After 16 seasons at Middle Tennessee, Ole Miss proved to be the perfect opportunity for the Chipola, Miss. native to come home.

This is not the first Southeastern Conference coaching gig that Davis has had. He spent five seasons as an associate head coach at LSU from 1997-02 before taking the Middle Tennessee job.

“Experience is everything,” Davis said. “Experience is an unbelievable thing. You look at coaches around basketball taking teams to Final Fours and winning championships. There’s some really good young coaches but there’s a lot of guys who have experience under their belt. It sure has helped us from a recruiting standpoint. It doesn’t matter if it’s my job or anybody’s job anywhere. Experience does matter.”

Ole Miss is entering a new era in their program history, too. The Rebels are coming off a season where they went 12-20 and finished last in the SEC with a 5-13 record. The Rebels have not made it to the NCAA tournament since the 2014-15 season, where they lost in the first round.

The August trip to Canada helped put the Rebels ahead of schedule, offensively and allowed Davis to install more detailed schemes.

“In one phase, we are way ahead of where we should be just because of the time we had (in Canada),” Davis said. “That really helped us a lot with offensive packages and defensive schemes so we’ve got a lot of things in which allows you to get to 4-on-4 and 5-on-5 quicker and make progress with your team.”

With the departure of Kennedy and the hiring of a new coaching staff, there was not a large amount of turnover to the Rebels’ roster. Key starters such as Terrance Davis, Devontea Shuler and Bruce Stevens are players coming back to Ole Miss and given Davis a sense of stability to rely on in his first year.

Senior guard D.C. Davis is another player who returned and was rewarded with a scholarship this season.

“(D.C.) a part of the (other) five guys who have all had great moments in league play while they’ve been at Ole Miss,” Davis said. “Then you look at the league that we’re playing in, that’s a big part of the equation also. You come into the SEC, which is a great conference, it’s the best the league has ever been top to bottom in the history of the league which is great for all of us. Where you find yourself with five guys who have played in the SEC, that’s not a big number out of 13.”

Ole Miss opens their season at home against Western Michigan on Nov. 10.