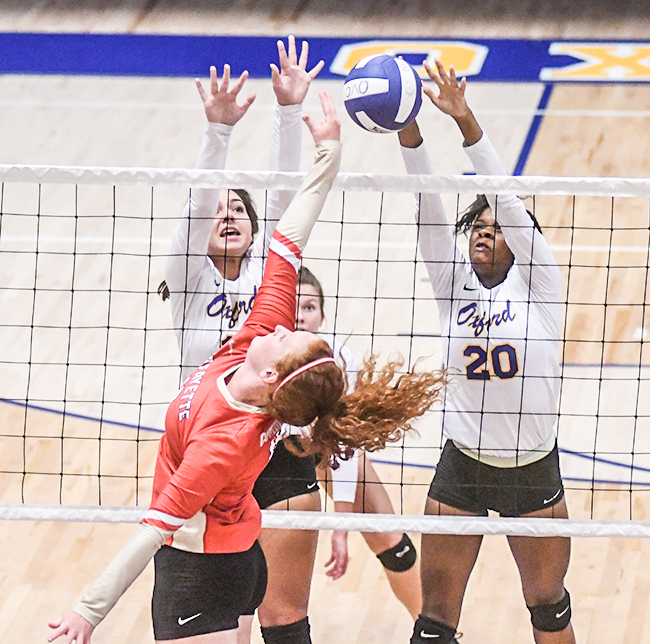 For two matches in a row Lafayette had chances to extend or win matches but were unable to. After a five-set loss to Caledonia last Thursday the Commodores fell to crosstown rival Oxford 3-1 (20-25, 25-23, 9-25, 24-26) inside the OHS gym on Tuesday.

Oxford (13-13-1) sweeps the season series over the Commodores.

For Lafayette, it was another opportunity at a win to pick up momentum ahead of the playoffs that fell by the wayside.

“We’re just not getting it done,” Lafayette head coach Clint Jordan said. “They’re really good teams and things happen like that against good teams, but we’ve got to figure a way to get out of that. This is probably the sixth loss this year that we’ve had the opportunity to win.”

The teams traded wins in the first two sets. The second set saw Lafayette (19-11) show the ability to hold off a late surge from their opponent and pull out a win to tie the match at 1-all.

Oxford responded with a dominant win in the third frame. It was aided by the loss of one of the Commodore’s best players. Senior Sarah Rae Goolsby went down with an ankle injury and did not return to the match.

“We lost a lot. Sarah Rae does a lot for us,” Jordan said. “She passes well, she serves well. She directs traffic, which is one of the hardest things. I felt our freshman, Hudson Lindsay did a good job of stepping in.”

Lafayette had the fourth set under control and looking to force a deciding fifth set, but Oxford rallied down five set points. The Commodores could not put the ball away to force a fifth set partly due to the play of Oxford sophomore Madison Freeze. Freeze saved two of Lafayette’s set points and served out the remainder of the set to win the match.

“That is a really hard position to be put in. Everything’s riding on it,” Oxford head coach Kacie Hengler said of Freeze. “She came out and did what she needed to do for the team. I don’t know if I’ve seen her dig balls like that all season.”

Oxford travels to Southaven on Thursday and Lafayette dips back into region play with a match at Amory.