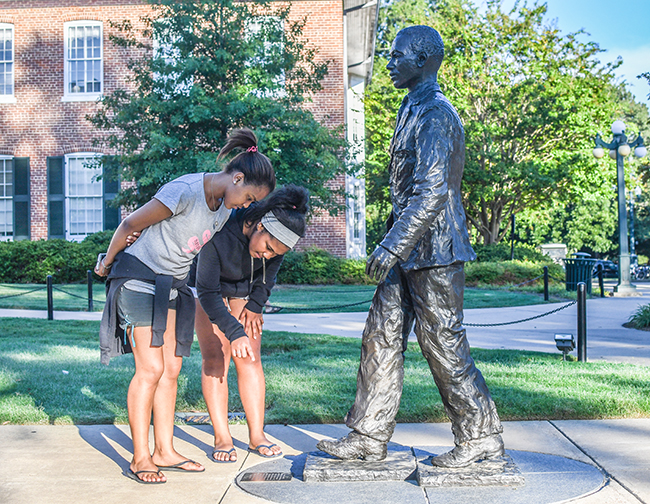 Several young faces were turned in curiosity on Tuesday evening at the Lyceum.

Their first time on the University of Mississippi campus, they talked about issues such as racism and sexual violence with Ole Miss students.

They are the girls of BRAVE, an organization founded by University of Mississippi alumna, India Baird.

The group arrived at Ole Miss as part of their civil rights road trip.

BRAVE was designed to empower, inspire and invest in female leaders. Girls aged 14-18 are trained as journalists and activists in order to tell their stories and connect with other women leaders, ultimately working to make an impact in our world.

The group interviews men and women and write for local newspapers; they also have a regular column in The Cape Times in Cape Town, South Africa.

“They write about what they see and hear,” said Baird. “The purpose is to give these young women a voice and let them tell their stories.”

Baird attributes the idea of BRAVE to a group of young girls who, at 10-years-old, saw the problems with safety in their community and had an idea to create safe places for girls.

Ferlin du Preez was one of those young girls who, now 18, wants to create young women leaders.

“We hold this very dear to our hearts,” said du Preez. “For me, personally, it has taught me to overcome a lot of challenges for myself and my community. It’s given me the support to get through high school. We have this aim to create young women leaders in our communities, for our country, and the rest of the world.”

The girls selected for the civil rights road trip visited South Africa in July, observing and learning about women’s roles in politics and civic engagement, as well as reproductive rights and sexual violence.

Now, they are journeying through the South in cities such as Nashville and Montgomery, Ala., Their itinerary also brought them to Oxford to meet with student activists at Ole Miss to continue their study of the civil rights movement.

“We have girls from South Africa and the United States who are on this civil rights road trip,” said Baird. “Now, we’re with you (Ole Miss students) and I see you as the future, so we’re excited. We want to hear what you’re doing on campus and what’s happening at Ole Miss.”

Several Ole Miss student leaders were in attendance to converse and answer questions from the girls of BRAVE. Sam Cox, the president of Rebels Against Sexual Assault, spoke about the resources available for victims of sexual assault. Jarvis Benson, president of the Black Student Union, said that they work to create a vehicle for students to voice their concerns on campus. Elam Miller, president of the Associated Student Body, said that they work closely with the Black Student Union to advocate for student voices to be heard.

After their Southern tour, the BRAVE girls will fly to New York to share their findings with Amina Mohammed, the Deputy Secretary General of the United Nations, as well as with women leaders from UNWomen and the UN Girls Education Initiative. On Oct. 6, they will celebrate the International Day of the Girl with a festival where hundreds of girls will exchange stories and ideas, and create an action plan to address some of the challenges that face girls and women today.