Oxford takes winning streak on the road to DeSoto Central 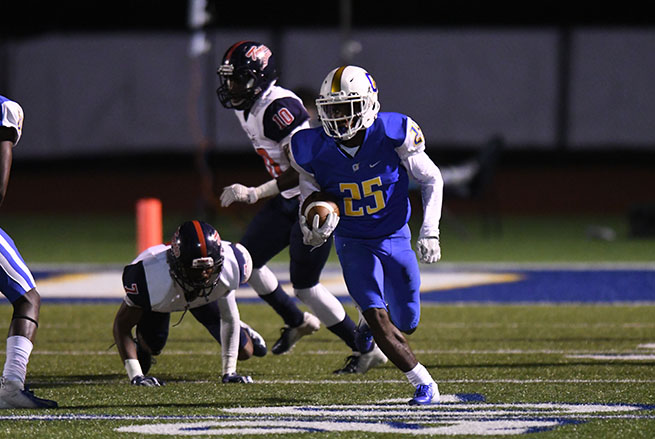 An unorthodox season is becoming the norm for Oxford.

Between shortened games, weather delays and quick turnarounds, the Chargers have experienced nearly every odd scenario possible. This week’s is not unexpected, though. Oxford travels to DeSoto Central for a rare Thursday night game (7 p.m., 95.5 FM).

The short week was planned well in advance, with the game always scheduled for Thursday due to Oxford having Fall Break on Friday and Monday.

“It’s kind of easier to prepare for in this case when you know what’s coming,” Oxford head coach Chris Cutcliffe said. “We’ve planned for that and we did it last year with DeSoto Central playing on a Thursday night. I think we’re prepared for that.”

The Chargers (5-1, 2-0 Region 1-5A) are in the midst of a five-game winning streak. Ever since their loss to Starkville on Aug. 24, the Chargers have not tasted defeat again. Nearly all five wins have come in different forms. Shutouts, going toe-to-toe with a rival and mounting a comeback have all been part of the recipe for Oxford’s success the last month.

Last week’s 35-21 win over South Panola included a 28-0 run after trailing by 14 points and then holding off a late surge from the Tigers.

“I think you saw that we didn’t panic when we got down early,” Cutcliffe said. “That didn’t surprise me. I know that we are capable of doing that because I’ve seen us train that way and work that way on the practice field. I was really proud to see our guys just rally together and keep fighting.”

After a 0-2 start last season, Oxford was behind the eight ball the rest of the regular season, fighting to get back into the playoff picture. The slow start to region play ended up being too much for the Chargers to overcome.

This season the script has been flipped entirely. The Chargers are still in complete control of their own postseason fate with two region wins already under their belt. They enter the third week of region play a different sense of things.

“Last year at 0-2 we felt like we were already in the playoffs. That every week was almost an elimination game,” Cutcliffe said. “So, it is a different mentality now but I think the challenge remains the same, to go out and just take it one week at a time.”

In their way of having a 3-0 start in region play is DeSoto Central. The Jaguars (3-4, 1-1) are coming off a 32-2 loss at Hernando and find themselves in dire need of a win to not fall into that group of two region losses.

The Chargers defense knows what they must do to come out victorious. The Jaguars throw ball when they need to, but the biggest threat is the ground game. Senior Shemaar Stapleton leads the team with 418 rushing yards to go with four touchdowns. Senior Josh Booker has a team-high 8 rushing touchdowns and 372 yards.

“They are definitely a heavy-run team,” Cutcliffe said. “There’s not one person that you can key on because they have some guys that can carry that backfield. They do a good job that way of just not giving you one thing to key on to stop.”