Ole Miss’ Markel Winters playing with his future in mind 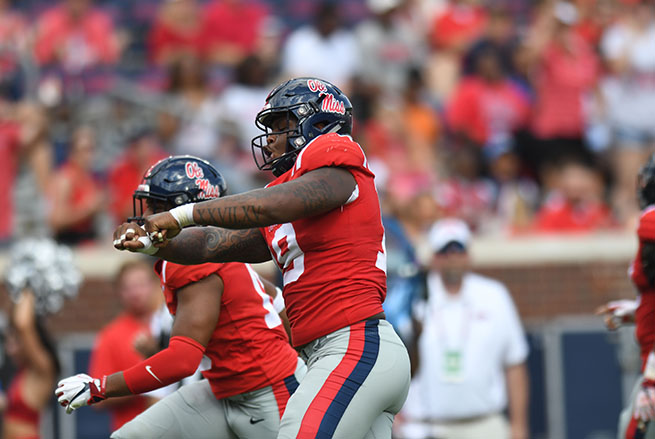 Markel Winters knows football is only a finite part of his life and is beginning to look towards the future.

The Ole Miss defensive end would love for football to stay a part of him after his time with the Rebels is done, but he is also a realist. Winters is aware there must always be a Plan B.

“I’ve already graduated so I’m preparing for life after football,” Winters said. “I know that if I take everything serious on the field it could possibly lead to football after college. I taught myself to just work through adversity even when people count me out because it’s going to happen in my life. People are going to count me out and I can’t fold up under the pressure.”

The motivation outside of the locker room and the football field has translated to success on it.

Winters came to Oxford last season after two years at Jones County Junior College. His junior year did not pan out how Winters had hoped, recording 5 tackles in the 11 games he played in.

Not becoming the starting player on the defensive line his first year at Ole Miss helped Winters find something during preseason camp in August. Through four games played this season, Winters has doubled his tackle count from last year to go with 3.5 sacks.

“I got in better shape, stronger,” Winters said. “I got more confidence back in myself than what I had in previous years back in JUCO. Just focus and I have a ‘why’. That’s what changed.”

Winters made his biggest impact this season in the Kent State game. The senior had three sacks for a loss of 26 yards and four tackles, all unassisted. Winters was not on the depth chart leading up to that game, but his effort against the Golden Flashes helped him move to No. 1 at defensive end on the depth chart and picked up his second start of the season.

“I’ll tell you, the biggest thing Markel Winters brought to the table (against Kent State) was his play speed,” Ole Miss defensive coordinator Wesley McGriff said. “I thought he did a really, really good job of ball keying, of getting off the ball and re-establishing the line of scrimmage. We’re going to thrive off that and we’re going to encourage him to show that more often.”

McGriff may not have to ask Winters to show more of it. The SEC Graduate patch that is on his jersey is all the motivation Winters needs.

Head of Ole Miss compliance to be ‘reassigned within…