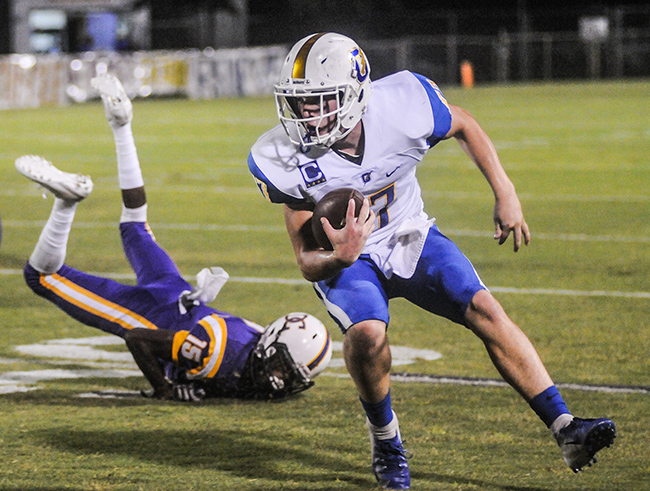 SOUTHAVEN — The offense was stagnant and in dire need of a jump start. Chris Cutcliffe went into his bag of tricks and called on J.J. Pegues to do so.

Trailing by three points, Pegues hit DeDe Pegues with a jump pass after a handoff for a 51-yard touchdown to give Oxford the lead with less than a minute remaining.

“We were having trouble executing and turning the football over and doing some things that I think weren’t very characteristic of us,” Cutcliffe said. “Thankfully we were able to make some plays. J.J. Pegues comes through in big moments again. What a great job by our kids to just keep on battling despite not playing so great on offense.”

Pegues was the spark for Oxford all night and was involved in all three scores. He scored the first touchdown on his own with a two-yard run in the second quarter. He then threw the last two touchdowns on trick plays. The third touchdown was a 31-yard pass to Jammie White with 3:42 left in the game. It was a similar play of the winning touchdown.

The junior showed his toughness after a scary hit turned out to be nothing more than that. While running for a seven-yard gain, Pegues’ helmet came off and a Jaguar defender came close to hitting his unprotected head. Pegues came out one play and then played the rest of the night.

“I think being voted a captain as a junior shows what his teammates think of (Pegues),” Cutcliffe said. “He’s just a remarkable competitor and he works day-in-day-out. I think he was going to do whatever it took to score at the end of the game and he stepped up and made big-time plays”

Pegues stepped in as the wildcat quarterback to help John Meagher who had an up-and-down night. Meagher was unable to hit some open receivers — mixed in with some drops — and also threw two interceptions on the night.

A third interception was negated after the Jaguar defender who picked it off was tackled and fumbled the ball back to Oxford in the fourth quarter.

DeSoto Center came in with a potent run game but was stifled most of the game by the Chargers defense. Oxford’s defensive front managed to get to Jaguars quarterback Reid Musselwhite for four sacks, two of them coming from KT Owens.

Late in the game the Jaguars (3-5, 1-2) found something in running back Shemaar Stapleton. The running back scored both of touchdowns for DeSoto Central. The first was on a 18-yard run that was set up on a defensive pass interference call on Oxford after what would have been an incomplete pass on third down was ruled interference by the Chargers.

Stapleton’s second score was a three-yard rush to give the Jaguars the 17-14 lead with 2:14 left after DeSoto Central returned a kickoff back to the Oxford 5 yard-line.

“We (stopped the run) for a large part of the game and then in the fourth quarter they took to us. We couldn’t stay on the field on offense,” Cutcliffe said. “You wear your defense when you do that. So, we’ve got to do a better job of maintain drives, offensively and not leave the defense on the field.”

Oxford returns home for a two-game home stand starting next Friday. With an extra day of rest the Chargers will try and slow down No. 2 Horn Lake (7-0, 2-0) next Friday.