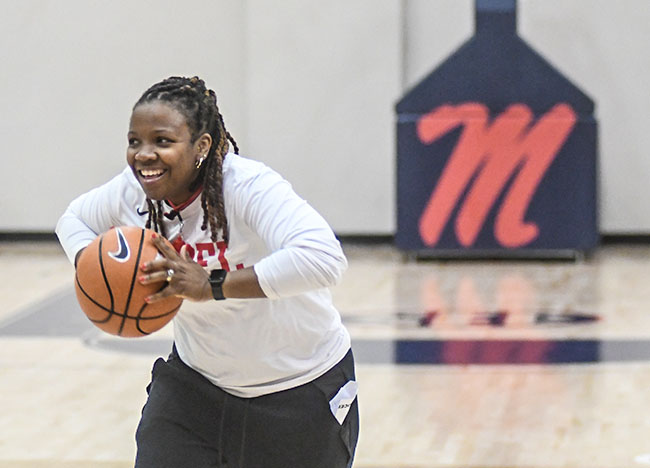 The past six months have been the busiest of Yolett McPhee-McCuin’s career. Since being announced as the newest head coach of the Ole Miss’ women’s basketball team, McCuin has filled a roster that saw a mass exodus of players from last season as well as trying to get as many recruits as she could in a finite amount of time.

McCuin does not know how, but she was able to field a full roster before next month’s season opener.

“Absolutely,” McCuin said when asked if her staff did a well a job as possible,” That’s not just coming from me, but also my colleagues in the conference. They just couldn’t believe we were able to fill a roster in basically six weeks. That is tough to do for anybody. But we think that we did a great job and were strategic. We didn’t go with a lot of freshman and the freshman that we went with I had a relationship with, so we knew what they will bring to the table.”

The Rebels’ roster this season will have a much different look to it. After nine players from last year’s team transferred or left the program for other reasons, McCuin scrambled to find nine new players to fill those spots.

McCuin managed to bring one of her players from Jacksonville State with her in redshirt senior forward La’Karis Salter. The other eight newcomers are a mix of four transfers and four true freshmen.

The familiarity of McCuin helped Salter give her new teammates an idea of what to expect from their first-year coach who is tasked with turning a floundering program around.

“It’s very fun. She lets you play your game,” Salter said. “But also it’s very disciplined. She wants you to give 100 percent effort 100 percent of the time. She’s very big on effort and toughness and playing hard. It’s not very hard to do what she asks you to do.”

McCuin inherits a program that went 12-19 last season and won one conference game (1-15). She replaces Matt Insell, who was relieved of his duties last spring after five years at Ole Miss and was unable to make the Rebels a perennial tournament team.

Ole Miss has not reached the NCAA Tournament since a trip to the Elite Eight in 2007. McCuin is aware of the expectations placed upon her and the ones she has set herself.

“I think that basketball minds will be able to see the direction we are going if the product is strong,” McCuin said. “Regardless, we have to get another level of talent in here in order to really be competitive in the SEC, which I think is the number one conference in the country. But one thing that you will see when our players play is that they are going to play hard, be excited to be out there, and you will see great comradery amongst them.”

Helping with this transition has been one of the four players that stayed with the program. Redshirt senior Shandricka Sessoms returns for her final season, again. She was injured early last year with an ACL injury and missed the rest of the season. She was granted a medical exemption and allowed to come back for another final year.

Having Sessoms at her side has been beneficial for McCuin. Even the though the star guard is still on the road to recovery, Sessoms has played a key role off the court this summer and offseason.

“Talk about a blessing in disguise,” McCuin said. “You don’t want anybody to get injured but it really worked out for me. She has been phenomenal. She has been my number one advocate in the locker room as far as the returners are concerned. She totally bought in from Day One.”

The returning number of plays was five, but Bree Glover was dismissed from the team earlier this week due to what McCuin categorized as a violation of team rules.

Ole Miss opens the season at home against Norfolk State on Nov. 6.