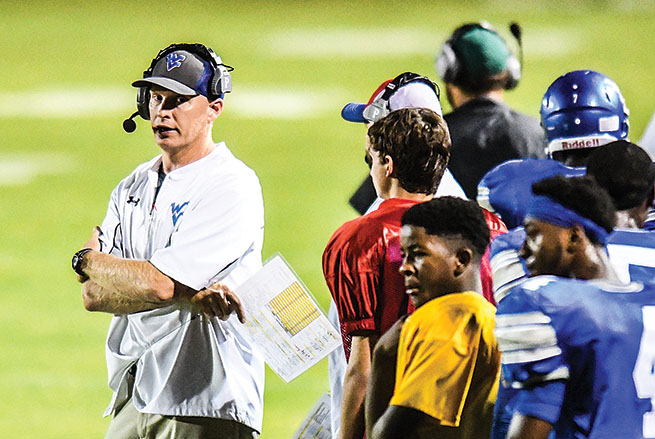 Coming off their heartbreaking loss to Winona, Water Valley made an emphatic statement to the rest of Region 2-3A that they were not going away.

The Blue Devils defeated Holly Springs 43-0 in their region opener last Friday and are ready to carry the momentum into their Homecoming match against M.S. Palmer tonight (7p.m., 105.5 FM).

The Blue Devils (6-1, 1-0 2-3A) are off to their best start since 2013, where the Blue Devils went 10-1 in the regular season. Their success has garnered attention around the state, breaking into the Associated Press Class 3A Poll at No. 5 this week.

“The only thing we said about (the Winona loss) is you can handle it three ways,” Water Valley head coach Brad Embry said. “You can point fingers and not fix it and it’s going to happen again or you can say that loss was bad luck and it’ll probably happen again or we can look at what we did right, fix what we did wrong and not let it happen again. I think that took a little bit of time to sink in and that’s fine. I’m glad our kids were upset but then you have to also turn around and flush it.”

The Blue Devils are also finding their winning ways again by overcoming so injury situations. Top rusher Tay Rucker, receiver Martavious Rockette and others are dealing with injuries that kept them out of last week’s game and could see them miss an extended amount of time during region play.

Because of that, Embry is having to once again turn to his younger and more inexperienced players to fill the void and maintain the level of production those injured had created.

The Dragons are coming off a 60-6 win over Coahoma AHS in their region opener. Their only other win was a 30-0 win over West Bolivar on Aug. 24.

The Palmer defense has kept opposing offenses in check through five games. In their three losses, their opponents have averaged only 22.6 points per game. With a Blue Devil offense that is putting up 34.7 points a night, the Dragons could prove to be a challenge.

“(Palmer) looks the part. They’re big,” Embry said. “They’re athletic and they throw it pretty good, they run it pretty good. They have an athletic defense and we’ve got come out and execute. We’ve got to get better and do what we do better and prepare for what they do. I know it’s a broken record but it’s a pretty good formula for winning.”