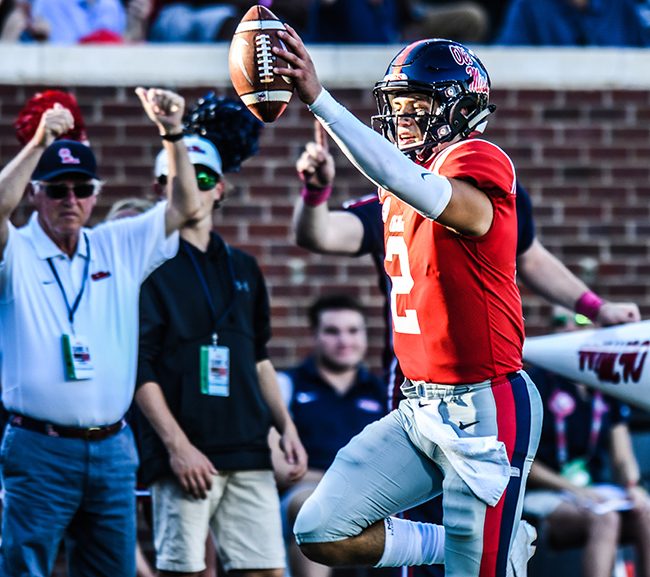 Everyone in attendance in Saturday’s rout of ULM got their first look at what the Ole Miss offense will look like with Matt Corral under center.

The freshman played almost the entire second half for the Rebels and record some career firsts. Corral threw for two touchdowns and ran for another in Ole Miss’ 70-21 win.

Finding success through the air is what was expected of Corral, but he also showed off some speed with his feet, leading the team with 78 rushing yards on six carries.

“Was happy to get Matt Corral some quality snaps with the ones,” Ole Miss head coach Matt Luke said postgame. “Not just handing the ball off but running the offense.”

Corral made his Ole Miss debut against Southern Illinois on Sept. 8, but it was late in the game once it was out of hand.

Saturday’s game was also deep in the Rebels’ pocket once Corral game in, leading ULM 49-7 at halftime, but Corral got in almost two full quarters of live action and was able to be a game manager with the offense.

“Matt has done a phenomenal job in preparing,” Ole Miss offensive coordinator Phil Longo said. “Jordan (Ta’amu) has helped him and that’s kind of the culture in our room. He’s a completely different personality than Jordan. He’s very aggressive as you saw (Saturday). But, mentally he made some really good decisions, too.”

The first touchdown pass of Corral’s career was an 11-yard catch by running back Scottie Phillips to cap the Rebels’ first drive of the second half. Corral’s second touchdown pass was a 24-yard catch by Elijah Moore early in the fourth quarter. He finished 10-for-10 with 143 passing yards.

Due to the number of injuries in the Ole Miss secondary there were some decisions to be made. Those decisions included moving two running backs over to defense.

Armani Linton returned back to the defensive side of the ball while freshman Tylan Knight made his debut as a full-time defender on Saturday.

Linton finished with six tackles and a sack.

“My mindset coming into this game was, ‘you’ve got to make plays,'” Linton said. “The first snap I was kind of jittery just because it’s the first snap back (on defense). After that I was able to settle down and just play my game.”

Not since playing at Pearl High School had Knight played meaningful snaps on defense. on Saturday against ULM he finished with three tackles.

“It was good to see T-Knight get over there and play a little bit,” Ole Miss defensive coordinator Wesley McGriff said. “He’s got tremendous football DNA and he plays fast. He’s going to make some mistakes and we understand that. As long as he’s playing fast and with some energy we can coach the other things.”

The 49 first half points are the most by Ole Miss in a half in the modern era (since 1958). The previous best was 42 in the second half against Houston in 1958. …It was the second time this season Ole Miss has scored more than 70 points. The Rebels scored 76 in their home opener against Southern Illinois. …DaMarkus Lodge finished with career highs in catches (9) and receiving yards (179). …It was the fifth straight game that Ole Miss’ defense tallied two or more turnovers in a game, the first time since 2014.