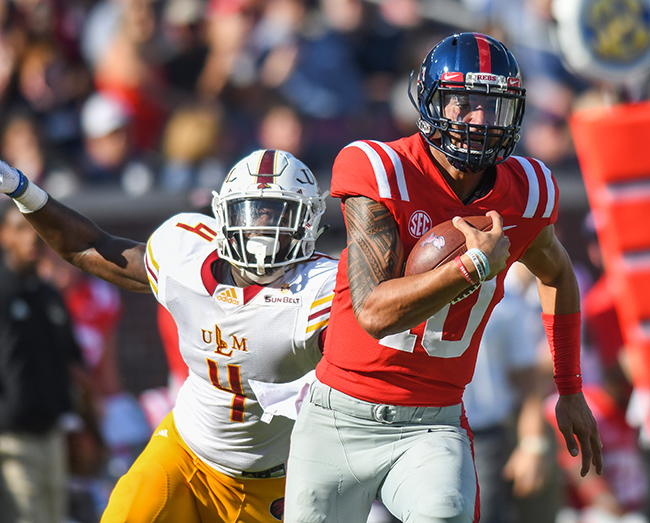 It took six games into the season, but Ole Miss finally put together their first complete performance of the year in their 70-21 win over ULM at Vaught-Hemingway Stadium on Saturday.

The Rebels (4-2) offense found it’s groove again and a new-look, makeshift defense bent at times but did not break.

Coming off their loss at No. 5 LSU last week the Rebels bounced back in a big way, scoring a touchdown on all seven of their first-half possessions and racking up 536 of their 826 yards of total offense in the first two quarters. They became the first Southeastern Conference team to have that many yards of offense in a half since 2003.

The offensive total set a new school record for yards in a game, surpassing the 751 the Rebels racked up against Troy in 2013.

Jordan Ta’amu only played in the first half, but was effective in those two quarters. He threw for 374 yards and three touchdowns. Ta’amu also rushed for 63 yards and two touchdowns on six carries.

The Rebels’ offense clicked all game, scoring touchdowns on 10 of their 12 possessions, including nine straight possessions resulting in touchdowns to start the game.

Freshman quarterback Matt Corral played his first chunk of productive minutes in an Ole Miss jersey, playing most of the second half. Corral finished the day with his first career rushing and passing touchdowns and 221 total yards (143 passing, 78 rushing).

The defense had two new faces with running backs Armanti Linton and Tylan Knight switching over to that side of the ball. The Rebels held ULM (2-4) to 427 yards and two offensive touchdowns.

The third score came off a 71-yard punt return by the Warhawks’ Marcus Green.

Up next for the Rebels is a meeting with Arkansas in Little Rock next Saturday at 6:30 p.m.