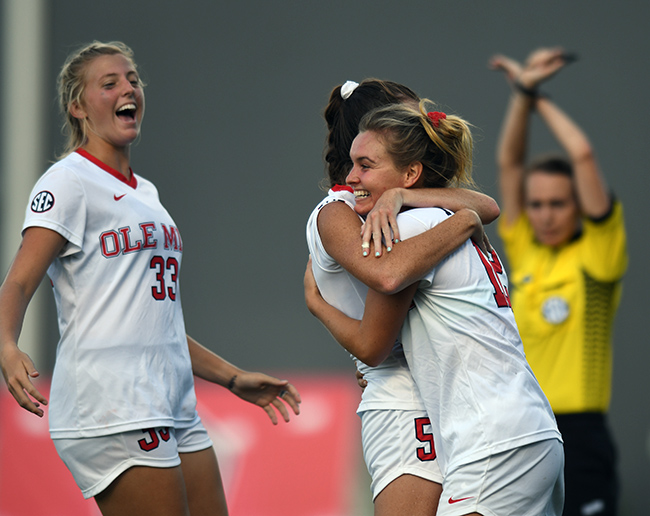 OXFORD, Miss. – Facing an Arkansas side that sat second in the league table entering the match, Ole Miss stepped up on Sunday, handing the Razorbacks their second SEC loss of the season by a 3-1 margin at the Ole Miss Soccer Stadium.

The Rebels (9-5-1, 3-2-1 SEC) came out of the match flying, creating a handful of excellent chances in the early stages of the first half. The two best opportunities came to Sydney Michalak in front of goal, one with her head and the other with her foot. However, both times the redshirt-freshman was turned away by Arkansas (9-3-2, 4-2-0 SEC) keeper Taylor Beltz.

After seeing so many goal scoring chances go awry early, the Rebels put one away in the 32nd-minute, and in impressive fashion. Breaking on the counter, Ella Frischknecht hit CeCe Kizer with a pass and Kizer released the speedy Lonnie Mulligan with a through ball. At full speed, Mulligan hit it first time, kicking the ball off the crossbar and into the net.

With the Rebels holding a 1-0 lead following the break, the next goal would be key to establish momentum in the second half. Ole Miss seized that momentum early as Channing Foster took a feed from Kizer and curled her shot inside the near post from 10 yards, doubling the lead.

Arkansas made a late push, scoring in the 82nd on Kayla McKeon’s sixth of the year. However, Kizer removed any thoughts of a comeback a couple of minutes later, burying a goal inside the near post to regain the two-goal lead and secure a big three points in Ole Miss’ race to Orange Beach.

With a big win in front of its home crowd in hand, Ole Miss hits the road for the next two weeks, travelling to Baton Rouge to take on LSU on Thursday before travelling to Kentucky the following Thursday. The matchup with LSU will be broadcast on the SEC Network.

Kickers
• Ole Miss outshot the Razorbacks 14-9 in the match, including an 8-3 margin in shots on goal.
• The Rebels improve to 9-2 when scoring in the first half, including 3-0 in SEC action. Ole Miss is 5-0 when scoring at least three goals.
• Lonnie Mulligan scored her first collegiate goal, becoming the 12th different Rebel to score this season.
• Channing Foster scored her 5th goal of the season, regaining sole-possession of second-place on the team. Foster’s tally was the third game-winner of her career.
• With a goal and two assists, CeCe Kizer climbed to 30 points in 2018, second most in the nation. Kizer leads the Rebels with 12 goals and six assists.