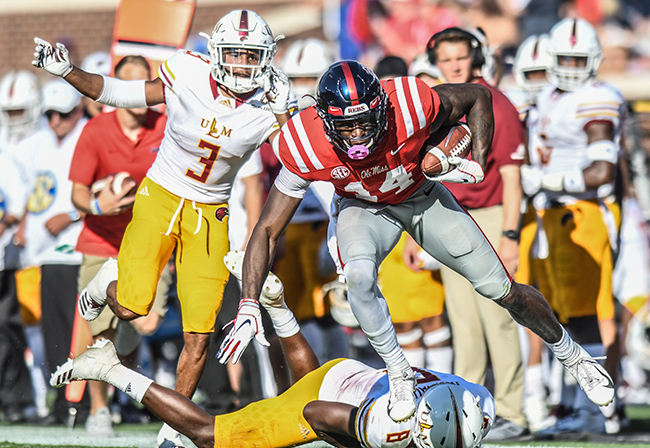 Ole Miss has proven they can light up the scoreboard against non-conference opponents, but with none remaining on the schedule this season the trust test begins. The Rebels must now try and do it against more elite defenses. Something they’ve struggled with.

The Rebels begin their stretch of six Southeastern Conference games in the next seven weeks this Saturday against Arkansas in Little Rock (6:30 p.m. SEC Network).

In their first two games against SEC defenses, Ole Miss (4-2, 0-2 SEC) has averaged 11.5 points per game. They scored seven points against Alabama and 16 points against LSU.

On the opposite end, the Rebels averaged nearly 58 points per game against their four non-conference opponents. The most recent offensive explosion was for 70 points against ULM last Saturday.

With a program-best 826 yards of total offense and scoring touchdowns on 10 of their 13 possessions against the Warhawks, the Rebels have to find a way to make that translate over to SEC play.

“I think no matter what defense you want to go out there and put up numbers against whoever you’re playing,” Ole Miss head coach Matt Luke said. “It doesn’t matter what the game is or who you’re playing. You want to live up to your standards. It’s about wanting to play as good as you can possibly play and I think if we take that approach I think we’ll be better off.”

There was positive progress in one aspect of the Rebels’ offensive attack last Saturday. The run game got back to putting up big numbers against ULM, rushing for 309 yards and five touchdowns.

Backup quarterback Matt Corral led the team with a career-high 78 yards to go with his first career-rushing touchdown. What the Rebels enjoyed seeing though was starting quarterback Jordan Ta’amu finding his legs. The senior rushed for 63 yards and two touchdowns on 6 carries against the Warhawks defense.

A balanced attack, offensively, is something that was lacking against the Alabama and LSU defenses for one reason or another. Starting this weekend the Rebels will need to find a way to establish it against SEC defenses if they want the second half of the season to go smoothly.

“I do see it as a step forward because a lot of (Ta’amu’s) decisions are pre-snap,” Ole Miss offensive coordinator Phil Longo said. “It’s that time in the twilight zone between them getting the signal and then running the play that they have to assimilate some information and make a decision on where they want to go. So, regardless of opponent, it’s the decision making before the snap that I thought could be more consistent and it was on Saturday. We have to continue to game plan with that in mind.”

Saturday will be a battle of the two worst defenses in the SEC. The Rebels are last, giving up 503.5 yards per game and Arkansas (1-5, 0-3) is right in front of them (400.5). The Razorbacks did give up 65 points to Alabama’s offense last week, but so has everyone who has faced the Crimson Tide this season thus far.