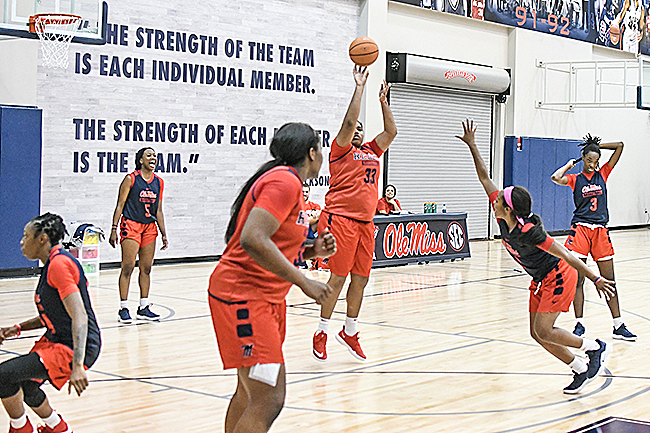 When Yolett McPhee-McCuin took the job as Ole Miss’ next head coach one of her players from Jacksonville State wanted to come along. La’Karis Salter decided to transfer to Ole Miss and finish out her career in the Southeastern Conference.

The senior forward is one of nine newcomers to the Rebels’ roster this season, helping fill the void of the mass exodus the program saw with nine players leaving following Matt Insell’s departure.
There was more to the decision than wanting to continue playing under McCuin, Salter wanted to try her luck in deeper, and more competitive, waters.

“Just a better opportunity,” Salter said of transferring to Ole Miss. “We don’t have as many resources at (Jacksonville State). To come here and have a practice gym to yourself and to come in anytime you want to. It’s a blessing. It was a pretty easy decision (to come with McCuin). Since I knew her and had played with her for two years.”

Playing in the SEC is not completely foreign to Salter. Before Jacksonville State the Tallahassee, Fla. native spent two years at Mississippi State from 2014-16. Salter has minimum playing time and decided to transfer to Jacksonville State, where she had to sit her junior year due to transfer rules but was redshirted. During her one season on the court for the Gamecocks, Salter averaged 3.6 points and 1.6 rebounds a game and played nearly 9 minutes a game.

The stats do not jump off the page for Salter but McCuin is expecting her role to increase for the Rebels.

“They call (Salter) Big Ticket for a reason,” McCuin said. “She is just super-talented. She can do multiple things, from shooting the three, to posting up, handling the ball in transition. She has also helped with the transition (to Ole Miss), which was key when I found out she was leaving Jacksonville. Here is someone that understands me, knows what I am about, and has been great for the locker room as well.”

What has transpired within the program at Ole Miss is not a secret to McCuin or any of the new faces on the team. The expectations within the team is to begin to bring the Rebels from out of the SEC cellar and to attempt to find a way back to the NCAA Tournament on a more frequent basis.

A big reason Salter wanted to come to Ole Miss was to accept that challenge put in front of McCuin and her staff this year.

“We just want to bring Ole Miss back on the map,” Salter said. “We want to start over. The culture is new here. We have a new demeanor, a new team. Sometimes new is good. New is what we need.”