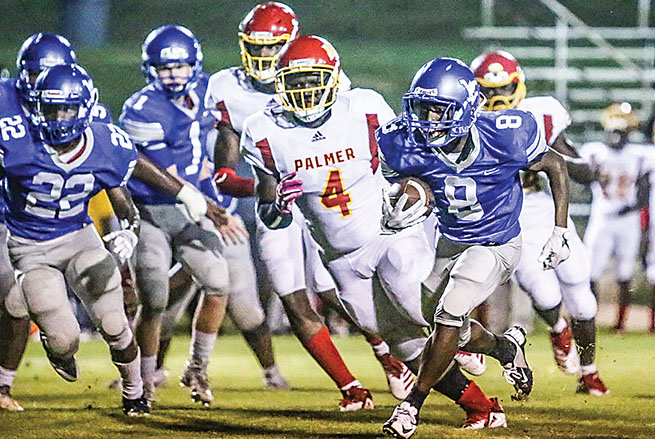 The success of Water Valley’s season through the first eight weeks has them on the brink of reaching a very important goal. If the Blue Devils can win on the road at Coahoma AHS this Friday (7 p.m., 105.5 FM) they will clinch a berth into this year’s MHSAA Class 3A state playoffs.

It would be the second straight year Water Valley (7-1) reaches the playoffs after missing them in 2016.

Taking care of Holly Springs and M.S Palmer has gotten the Blue Devils off to a quick 2-0 start in Region 2-3A play. With only three games left on the region slate, a win would all but assure the Blue Devils one of the four playoff spots.

Defeating the Tigers (4-4, 0-2) on Friday would also keep Water Valley on a collision course with North Panola for a region title clash in the regular season finale on Oct. 26.

One factor to their success has been the return of a potent offense, specifically on the ground. The Blue Devils have been gouging opponents with the combination of Tay Rucker and Jacob Truss. Rucker leads the attack with over 550 yards and 10 touchdowns on the ground. Truss is right behind him with four rushing scores and nearly 400 yards.

Coahoma has only been in the region for two years. Before moving to 2-3A and replacing Charleston during re-classification in 2017, the Tigers had been residing in Class 2A. They spent their final five seasons in 2A as a member of Region 2-2A before making the jump up to 3A.

The first encounter with Water Valley as region opponents did not go well for the Tigers last year. The Blue Devils defeated them 41-6. The first season and a half in 2-3A has also not been kind to Coahoma, who has a combined 5-14 overall record and 0-7 in region play.

Junior quarterback Willie Eagins leads the Tigers. Eagins has thrown for over 600 yards and 6 touchdowns and 1 interception. Eagins is also Coahoma’s leading rusher with 561 yards and 4 touchdowns on 70 carries through the first 8 games. Fellow junior Christopher Russell follows Eagins with 456 yards and has also scored 4 touchdowns.