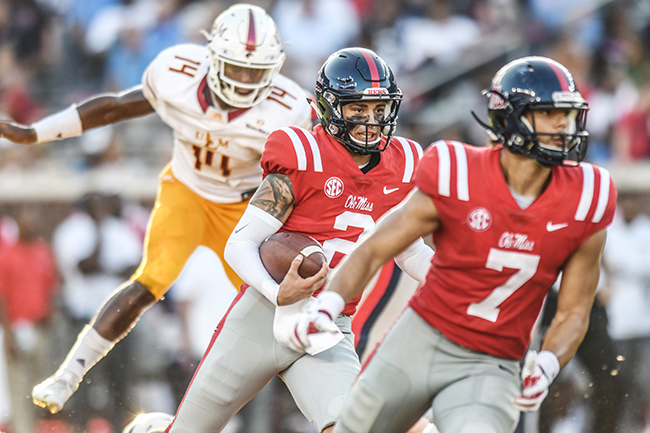 Fans who stayed for the second half of Ole Miss’ onslaught of ULM on Saturday got to look into the crystal ball and see what the Rebels’ offense might look like next season.

Quarterback Matt Corral played most of the final two quarters and provided plenty of highlights. The freshman recorded his first career passing and rushing touchdowns while leading the offense on three successful drives resulting in touchdowns in the second half.

It was the first time Corral played any significant time on the field after making a brief appearance against Southern Illinois on Sept. 8.

Saturday’s game was Corral’s second game of the season. With the new redshirt rules set by the NCAA, a player can participate in up to four games and still be eligible to earn the redshirt tag. That has been Luke’s intention all along but Saturday’s large lead, and three more games to work with, allowed Corral the opportunity to get a large chunk of snaps with the first team offense.

If starting quarterback Jordan Ta’amu remains healthy, Corral is happy with the prospect of only taking the field two more times this season.

“It’s a win-win situation right now,” Corral said of redshirting. “I hope Jordan stays healthy. I hope he goes to the NFL and wish nothing but the best for him. …We’re close. He trusts me in what I say because I know a few things that he doesn’t and he knows a lot of things that I don’t. We just feed off of each other and we work as a team rather than against each other.”

Corral was nearly flawless in his play against ULM. He completed all 10 of his passes for 143 yards and 2 touchdowns, earning a quarterback rating of 286.1.

While being recruited out of Long Beach Polytechnic High School in California, the intelligence factor of Corral was never really discussed or used as a positive attribute. It is something offensive coordinator Phil Long values out of his freshman quarterback.

“What I liked was that (Corral) made really, really quick decisions,” Longo said. “Even when he made a couple wrong ones he made them really, really fast and they were really aggressive. One became a positive play because of how quickly he dished the ball out. I think the sky’s the limit for Matt as he keeps developing.”