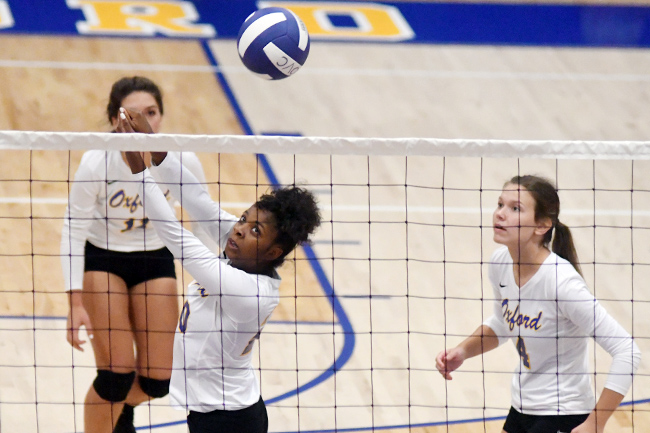 Oxford closed out the regular season on Tuesday and has over a week before their next match. That is good news for a team limping into the postseason.

The next time Oxford (15-17-1) returns to the court will be at Clinton for a first round match against the Arrows (21-8) in the Class III state playoffs next Thursday.

In the past 20 days, the Chargers have played 11 matches. Eight of them were played on two separate days in two different tournaments.

“We kind of need to reset,” Oxford head coach Kacie Hengler said. “We need to re-evaluate some things just because we have made so many changes throughout the season to our lineup. We’ve had injuries. So, we just need to kind of figure out what is the best rotation we can put out there. We haven’t quite figured that out yet and also just making sure those people are comfortable working side-by-side next to new players.”

Hengler is wrapping up her second season at the helm of the Chargers. It has been an up and down year for Oxford, who started by being swept at Tupelo and then defeated the defending Class III state champions in Brandon two days later. Since then, it has been a one step forward, two steps back kind of season.

Injuries have also been a massive issue for the Chargers this year.

In the opening match against Tupelo, senior Lauren Sink injured her finger and missed some time in the early part of the season.

Sink also missed time later in the season due to other injuries, as did other players.

That required Hengler to play a lot of younger players, some playing both junior varsity and varsity matches on the same night.

Hengler is hopeful that the experience has given her team added depth moving into what Oxford hopes is a lengthy postseason run.

“We’ve kind of grown broad rather than narrow. So a lot of them have become well-rounded,” Hengler said. “They’ve all grown so much. That’s why I can put everybody in. There’s really nobody that I’m (worried about). If someone’s struggling I’ve got someone to go in for them. That’s a plus.”

The Chargers played Clinton on Saturday during the Arrow Invitational at Clinton High School, giving the team a good idea regarding their first round opponent.

The Arrows won that game 2-1, but Oxford was able to take away some confidence before the two meet next week with much larger stakes.