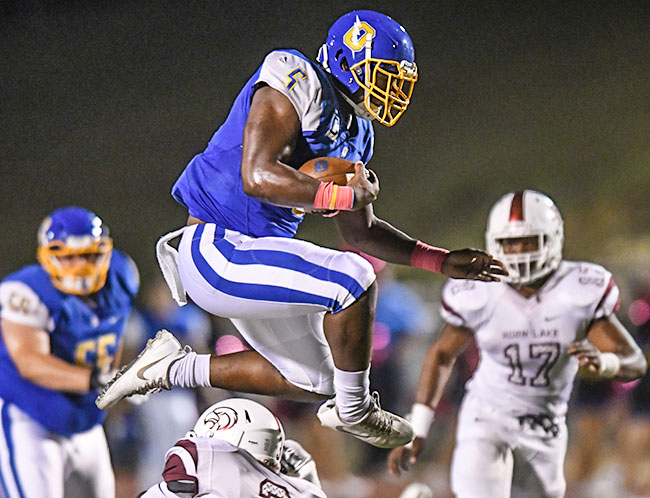 Football is a four-quarter game, but on Friday night Oxford probably wished it was only two.

The Chargers hosted No. 1 Horn Lake in a pivotal game of Region 1-6A unbeatens with the winner feeling good about their region title chances.

For 24 minutes Oxford was on track to upset the top team in the state, but the Eagles turned things on in the second half. Horn Lake outscored the Chargers 21-0 in the final two quarters to rally to a 28-17 win at Bobby Holcomb Field.

The Eagles’ defense made adjustments at halftime and stifled an Oxford (6-2, 3-1 1-6A) offense that managed 17 points in the first half.

“We didn’t get very much going offensively at all in the second half,” Oxford head coach Chris Cutcliffe said. “Give a lot of credit to (Horn Lake). They really executed well and played really well up front. We weren’t able to execute. Their defensive line was disruptive and we didn’t’ have very much of an answer for that in the second half.”

Before pitching a shutout in the final two quarters, Horn Lake (8-0, 4-0) struggled to figure out the Chargers’ offense. Outside of a pick-six by Eagles defensive back Tony Washington on Oxford’s second play of the game, Horn Lake allowed two touchdowns and a field goal.

Meagher finished with two touchdowns. The first was a 34-yard pass to J.J. Pegues late in the first quarter and the second was a 43-yard run as time expired in the opening quarter to give Oxford a 14-7 lead at the time.

Jack Tannehill connected on a 32-yard field goal attempt midway through the second quarter for Oxford’s final points of the night and a 17-7 lead at the break.

“We made some big plays in the first half. We had some good field position set up by some turnovers and did some good things,” Cutcliffe said. “We were close on a couple things in the second half even. Against a team like that it’s very hard to drive the ball consistently. You got to find ways to create some big plays and that’s hard to do against the kind of pass rush they have.”

It was a much different story at the start of the game compared to how it ended for Horn Lake’s offense. Oxford’s defense forced six punts and caused two Horn lake fumbles in the first half. The Eagles finished with four fumbles overall.

It was not until midway through the third quarter that the Eagles’ offense found it’s rhythm. Standout athlete Nakobe Dean capped Horn Lake’s first productive possession of the game with a two-yard touchdown run to cut Oxford’s lead down to three.

With nine minutes remaining Horn Lake took their second lead of the game, completing the 10-point rally. Quarterback Raydarious Jones found receiver Emeko Blakes in the end zone for a five-yard touchdown pass and put the Eagles ahead 21-17. The next possession Horn Lake broke the game open with a 34-yard touchdown run by Jamario Harris with six minutes left.

“I think our defense after all the three-and-outs (by the offense) in the second half got worn down a little bit and (Horn Lake’s) rushing attack kind of came through towards the end of the game,” Cutcliffe said.

Oxford stays home next week when they host Columbus for Homecoming.