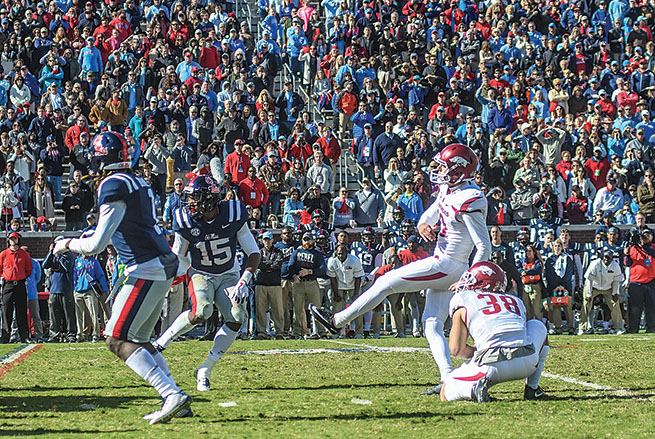 Arkansas kicker Connor Limpert made a 34-yard field goal with 4 seconds left as the Razorbacks rallied from a 24-point deficit for an improbable 38-37 victory over Ole Miss, at Vaught-Hemingway Stadium in Oxford, Miss. on Saturday, October 28, 2017. (AP Photo/Oxford Eagle, Bruce Newman)

Arkansas has had Ole Miss’ number in recent years. The Razorbacks currently own a four-game wining streak over the Rebels as they enter their Southeastern Conference showdown in Little Rock on Saturday.

The first win of this current stretch for Arkansas was a convincing 30-0 win on a rainy afternoon in Fayetteville in 2014. The past three wins have been by a combined six points and included some of the more unique finishes in college football.

First, there was the 53-52 win in overtime inside Vaught-Hemingway Stadium in 2015. The Razorbacks benefited from the now-infamous 4th and 25 play where Arkansas tight end Hunter Henry was tackled but not before he flung the ball backwards to Alex Collins who scooped it up and completed an improbable fourth down conversion. Arkansas would later score in the overtime period, escaping Oxford with a win.

In 2016, Arkansas earned a 34-30 win in Fayetteville off a touchdown run by Jared Cornelius late in the fourth quarter. Then last season the Razorbacks again snatched victory away from the Rebels with a last-second field goal for a 38-37 win.

Due to those improbable outcomes, several Ole Miss players have never experienced a win over Arkansas. That includes offensive lineman Sean Rawlings.

“One of the biggest things to me and the older guys is we haven’t beaten Arkansas since we’ve been here,” Rawlings said. “That’s something that’s in the back of our mind and kind of pushes us a bit. It bothers us. I remember my heart dropping on (the fourth down) play. I won’t talk about it. There’s definitely been some close margins. Last year, I know everybody is upset and disappointed in ourselves that we didn’t close that one out.”

The Rebels finish the year with six consecutive conference games. If they want the season to turn the corner and earn the first conference win of the year, Ole Miss will have to exorcise the Arkansas demons that have haunted Ole Miss the last several years.

“It has been some different games,” Ole Miss head coach Matt Luke said. “I think we’ve got to focus on this team and this year, but it has been kind of a different series. They’ve come out ahead the last few times but it’ll be important for us this year to go play good football, to not turn the ball over, to do the little things it takes to win those games. Even though those games are quirky, it still comes down to two or three plays either way. You’ve got to make sure you handle your business so those plays go your way.”

For Arkansas, they are still working out the growing pains under first-year coach Chas Morris. Morris replaced Bret Bielema and has not seen games go their way in the first half of the season. The Razorbacks only win came against Eastern Illinois on Sept. 1. Since then, they have dropped five straight but have seen improvement the past couple of weeks.

A one-score loss against Texas A&M at AT&T Stadium in Dallas on Sept. 29 was followed by a 65-31 loss to Alabama last week.

It was the most points the Crimson Tide defense has allowed all season.

“It’s an SEC game and it’s the next one,” Luke said. “For me, we’ve got to find a way to score one more point than they do. That’s our focus. We’ve got to go play good football. Go play consistent football and take care of business. I think everybody feels that way, that you want to go get a W.”