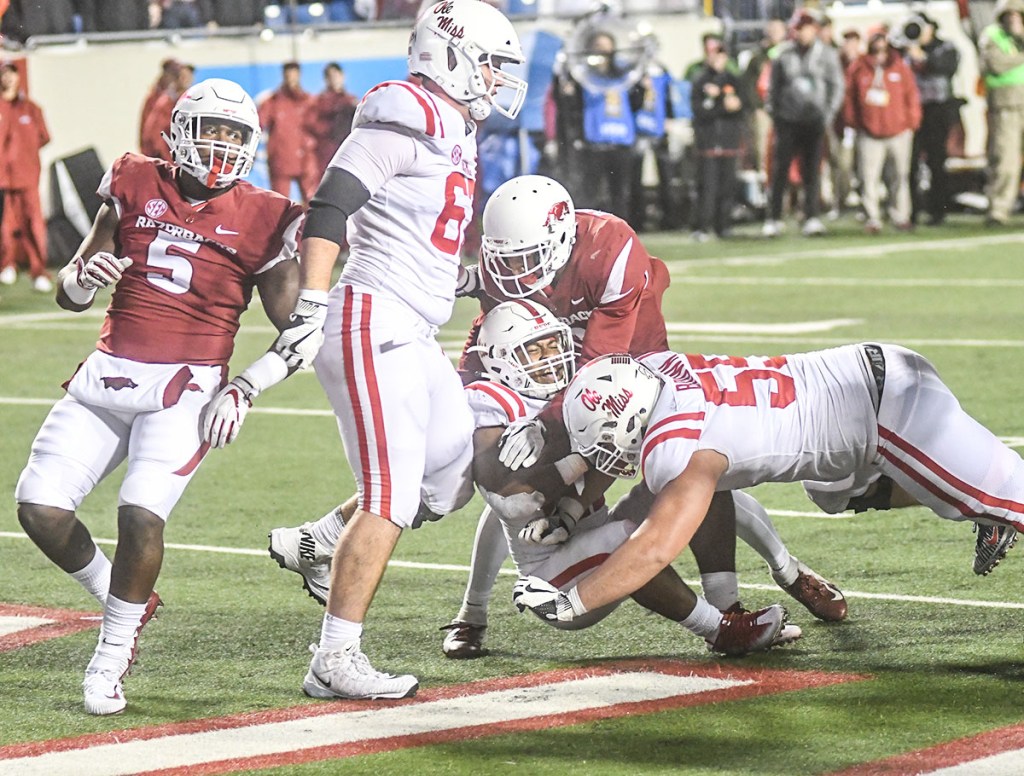 LITTLE ROCK, Ark. — Needing to go 97 yards to erase all the heartache from the last three years, Jordan Ta’amu managed another game-winning drive that might have salvaged Ole Miss’ season.

Ta’amu and the Rebels erased a 14-point deficit and defeated Arkansas 37-33 inside a waterlogged War Memorial Stadium on Saturday. It is the first win over the Razorbacks since 2013 and they did it in dramatic fashion.

Scottie Phillips scored from five yards out to put the Rebels (5-2, 1-2 SEC) up four points with 42 seconds remaining. Zedrick Woods took care of the rest as the defensive back picked off Cole Kelley to steal victory from the jaws of defeat.

“I’m so proud of those guys for continuing to battle and then getting a stop when they needed it in the second half,” Ole Miss head coach Matt Luke said. “It was just enough for us to get the win. I don’t think we played our best football in the first half.”

Arkansas (1-6, 0-4) fell behind 3-0 after Luke Logan put the Rebels up with a 36-yard field goal early in the first quarter but then rattled off 30 points and scored on seven of their first eight drives. The eighth ended the first half.

Ta’amu threw one of his two touchdown passes and rushed for another in the first half as the Rebels trailed 27-17 at halftime. He finished with 528 yards of total offense (387 pass, 141 rush) and three touchdowns.

The Rebel offense then went on to outscore Arkansas 20-6 in the second half.

The plays of the game came from a seldom-used source this season. The tight end duo of Octavious Cooley and Dawson Knox provided a crucial touchdown and set up another in the second half. The biggest was from Knox on the Rebels’ game-winning drive. Knox caught a pass from Ta’amu and continue to run for 48 yards, setting the Rebels up inside Arkansas 30 yard-line.

The much maligned Rebel defense put the game on their backs and proved they could provide key stops. The final three drives of Arkansas’ resulted in two punts and Woods’ interception for the win. After giving up 303 yards in the first half, Ole Miss held the Razorbacks to 173 in the second half.

“I’m so proud of the guys for fighting,” Ole Miss defensive coordinator Wesley McGriff said. “That’s what you have to do in SEC games on the road. You have to make adjustments during the game in order to win games. They did a tremendous job of that tonight.”