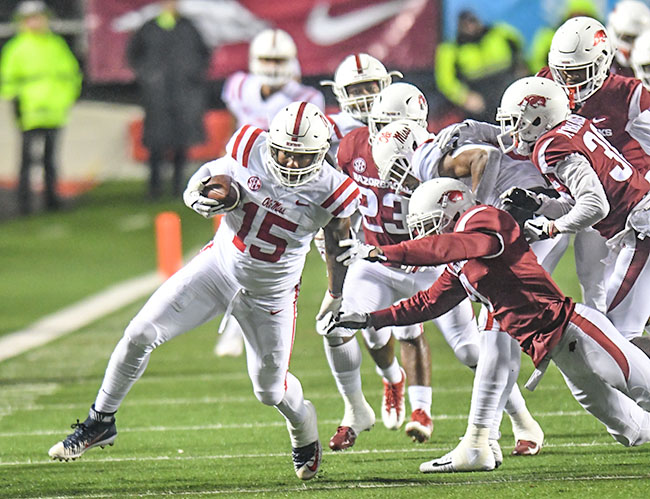 LITTLE ROCK, Ark. — Octavious Cooley remembers what happened last year against Arkansas. He remembers the fumble in the first half that killed Ole Miss’ chances to put the game away and propelled Arkansas to the 38-37 win.

On Saturday inside War Memorial Stadium, Cooley made sure to erase history and provide new memories.

Both Cooley and Dawson Knox helped the Rebels mount their second half comeback to defeat Arkansas for the first time in five tries and reminded everyone in attendance that Ole Miss has talented tight ends.

Neither has had impressive seasons up to this point but on Saturday the pair scored a touchdown and set up another.  They combined for 150 receiving yards.

“They’re definitely capable and they made some big plays tonight,” Ole Miss head coach Matt Luke said. “After last year it was kind of hard on (Cooley) with the strip. It was kind of special for him to be able to make a play and to really spark us. I think that game changed the game.”

Earlier in the second half Cooley had a 66-yard catch that went for a touchdown after he broke a couple tackles and out ran an Arkansas defender. Cooley’s touchdown cut Arkansas’ lead to six points midway through the third quarter.

Cooley’s two catches against Arkansas were his first of the season and they totaled 85 yards.

“I felt like that was my time to make a place,” Cooley said. “It felt good. Nobody stopped talking about (last year’s game). So, I had to come in and do something.”

It was a career night for the Rebel quarterback. Jordan Ta’amu compiled 528 yards of total offense against Arkansas. The senior rushed for 141 yards and a touchdown while throwing for 387 yards and two more touchdowns.

The mark is the second-most offensive yards in a game by a player in school history, finishing second only to Archie Manning. The Ole Miss legend has the record with 540 total yards he amassed in the infamous Alabama game in 1969.

“I think this was one of the most complete games (that I’ve played),” Ta’amu said. “I was just being smart with the ball again and making right decisions and making right reads. Of course the O-line and receivers doing their job and giving me enough time to make that decision.”

One of Ta’amu’s main targets went out of the game early. D.K. Metcalf suffered a neck injury early in the first half and did not return. The severity of the injury or the exact nature of it was unknown after the game but Matt Luke hoped to know more on Sunday.

Metcalf finished with one catch for 49 yards before exiting.