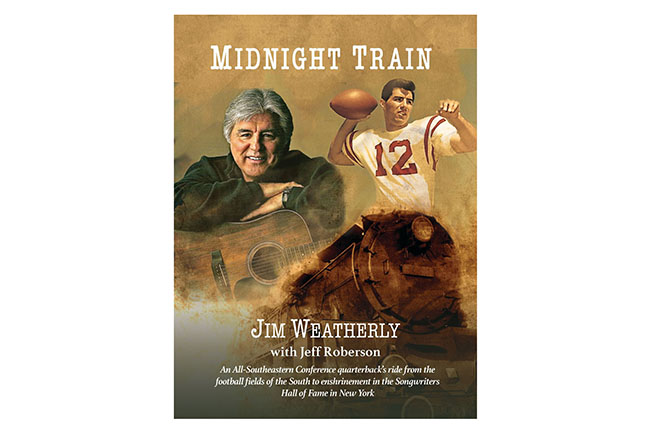 As they grow up, many boys want to either be a quarterback who leads his team to a championship or to pick up a guitar and join a band.

For one boy from Pontotoc, he got his cake and ate it, too.

Jim Weatherly has lived a life most only dream about. He became the quarterback at Ole Miss during some of the program’s best years, then turned around and become of the music’s most successful songwriters.

Weatherly’s 50-plus year career as an athlete and musician are documented in the new book “Midnight Train.” The memoir is over 300 pages of stories from Weatherly’s time at Ole Miss, his move to Los Angeles and later to Nashville where he wrote some of music’s most popular songs.

The book was co-written by Weatherly and longtime Oxford writer Jeff Roberson.

The idea came from when Roberson had Weatherly, his first cousin, as a guest on a podcast five years ago. After the episode had been recorded, Weatherly called Roberson and said they should do a book on Weatherly’s life.

“We worked on it for five years,” Roberson recalls. “He mentioned to me about writing a book and I’m used to writing 800-word stories, not 80,000 word books. So, I waited and I waited and I waited. Then one night I was watching TV and saw Gladys Knight in her restaurant in Atlanta cooking and singing ‘Midnight Train to Georgia.’ So, I thought ‘what are you waiting for?’ I called (Weatherly) the next day and we got started.”

The title of the book is based on the hit song “Midnight Train to Georgia,” which Weatherly wrote and Knight made famous. The song was named by Rolling Stone magazine as one of the Top 500 songs of all time. The song was titled “Midnight Plane to Houston” but the story of how fate intervened is told in detail in the book.

The book is the first written by either Weatherly or Roberson, and the familial connection added in a little more awkwardness at first. Being cousins, Roberson felt he knew about all there was to know of Weatherly’s life, but as they sat down and began on the book there were things Weatherly began to reveal.

“One reason (Weatherly) asked me to help write this books is because he said ‘You know all my stories’, and of course I didn’t know them all,” Roberson said. “It makes it a little different. Did we agree on everything? No. Did we work through everything? Easily. We didn’t really ever have many bumps in the road as far as getting the book out.”

Weatherly played for Ole Miss in the early 1960s and helped lead the Rebels to SEC Championships in the 1962 and 1963 seasons. He played under legendary coach Johnny Vaught as Ole Miss went a perfect 10-0 on their way to a national championship in 1962.

Music was always a passion of Weatherly’s and after college, he went out west to California to try and break into the entertainment business.

“I was around 12 or 13 when I started (writing songs),” Weatherly said. “I guess I thought they were pretty good then because I just kept doing it. But later on, after many years of struggle, I realized how hard it is to write really good songs. I’m still learning.”

Weatherly and Roberson will be at Thacker Mountain Radio at the Lyric Theater on Thursday. There will be a book signing at 5 p.m. prior to the radio show beginning at 6 p.m. Excerpts from the book will be read during the program.

The book is available now and can be ordered at Square Books or at midnighttrainbook.com