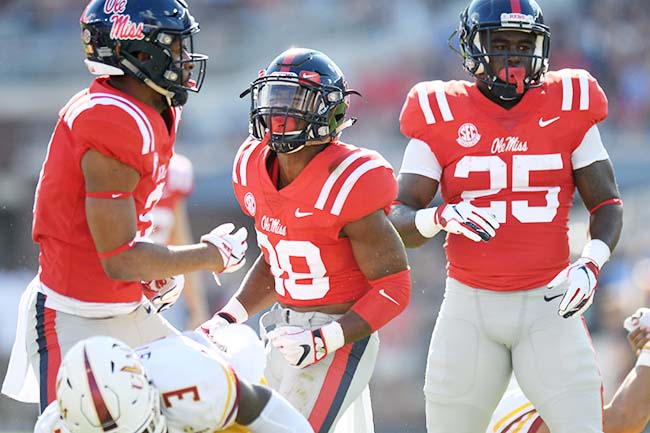 Tylan Knight is all smiles.

The freshman cannot keep from flashing a grin every time he is asked about playing defense. Ahead of the Rebels game against ULM, the Ole Miss running back was shifted over from offense to defense due to a rash of injuries in the secondary.

Knight is happy to be back.

“It’s where I played in high school. So, it’s kind of like going back to my home,” Knight said. “I kind of started smiling a little too much when they told me they were going to move me back. I love the defensive side of the ball. You get to hit people.”

Knight was a standout at Pearl High School and played on both sides of the ball during his four years as a Pirate. He garnered attention late in his high school career, but it was not until he helped Pearl to an undefeated season and a Class 6A state championship last December that schools, or better yet one school – Ole Miss – decided to take a chance on him.

Getting the opportunity to play for a school in his home state, and one at the highest level of college football, has been a blessing Knight has not taken for granted seven games into his college career. Being slighted by so many programs before coming to Ole Miss is not something Knight is losing sleep over.

“I believed in myself,” Knight said. “I already had a support group behind me. I knew what I brought to the table. So, I just put it on film and once you put it on film not too many people can say anything.”

With the Rebel secondary being depleted with season-ending injuries to Jaylon Jones, Montrell Custis and C.J. Moore, it was a necessity for Knight to go back to the other side of the football to build up reserves.

For Knight, there was not much of an adjustment when it came to learning a new playbook. Pearl ran a similar defensive scheme, so all Knight needed to learn was the verbiage that defensive coordinator Wesley McGriff uses.

It also helped that Knight was familiar with the defensive backs already. His locker is next to several of the Rebel defenders.

“They got me right as soon as I got here. First day,” Knight said.

Armani Linton joined Knight in making the move from running back to defense. However, Linton had already spent time on Ole Miss’ defense before being shifted to the running backs room ahead of this season.

Having Linton on the field during practice and in games has helped Knight immensely, Knight said.

The two also have formed a bond off the field, which is paying dividends for Knight’s success on it.

“I still go over to (Linton’s) house and watch film,” Knight said. “Because Armani knows. When I first got here as a running back he kind of took me under his wing and showed me the ropes. The ins and outs of the playbook and kind of opened it up to me more. I was a freshman and didn’t really know anything. He was kind of like a mentor for me. Still is.”