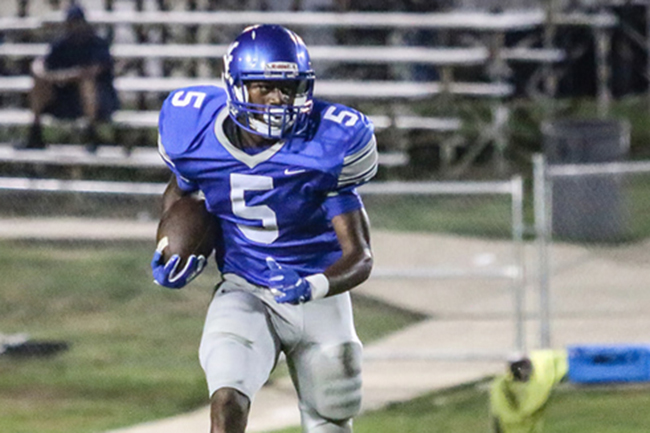 Whenever Water Valley’s defense shuts out their opponent they are awarded pizza the following Monday. It is a tradition that was started some years back, but this week there was not any pizza.

Despite shutting out Coahoma AHS 41-0 last Friday, the defense felt they did not meet their own standards and opted to not celebrate the victory in their usual fashion.

The move speaks to the leadership of the Blue Devils defense and knowing they are playing for much more than a slice of pizza this season.

“I thought that was a good thing. That they have high expectations of themselves,” Water Valley head coach Brad Embry said. “Even though we shut a team out they weren’t proud of themselves like they were in the past. …There’s what you expect of yourself. Just because you win, everything’s not grand.”

The first goal of the season was checked off last week when the Blue Devils (8-1, 3-0 2-3A) clinched a spot in the MHSAA Class 3A state playoffs with a win over Coahoma. Knowing they will be playing football in November, the next challenge is trying to make sure that first playoff game is at home.

A win over Independence (4-5, 1-2) this week on senior night will guarantee the Blue Devils home field advantage in the first round and set them up for a shot at the region title next week against North Panola.

“This week’s big,” Embry said. “There’s three seasons: non-region, region and playoffs. So this game has a huge effect on the third season. We want to start off with a home playoff game.”

First, Water Valley must get past the Wildcats who have had an up and down year. Independence has not managed to put together a winning or losing streak all season, alternating wins and losses weekly. The Wildcats arecoming off a 20-14 overtime loss at M.S. Palmer.

While the Blue Devils are comfortably in the postseason, Independence is now battling with the rest of Region 2-3A to earn one of the remaining playoff bids.

“(Independence) has always been well coached,” Embry said. “They’ve been up and down. I know they had a tough one Friday night. …That happens. I know (head coach Richard Russo). He does things the right way and those kids will respond. It’s a big one for them, too.”

Playoffs set to begin for Blue Devils, Chargers and…