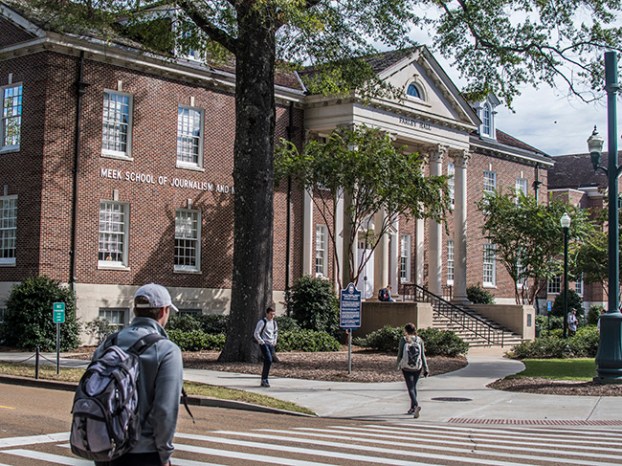 Pedestrians walk outside the journalism school at the University of Mississippi, in Oxford, Miss. on Thursday, October 18, 2018. Trustees of the Mississippi state College Board voted unanimously Thursday to strip Ed Meek's name from the Meek School of Journalism and New Media. The academic unit is now known just as the School of Journalism and New Media, without a namesake. (Bruce Newman, Oxford Eagle via AP)

By JEFF AMY and EMILY WAGSTER PETTUS
Associated Press
JACKSON (AP) — A donor’s name is being removed from the University of Mississippi journalism school after his Facebook post drew backlash for being racist.
Trustees of the state College Board voted unanimously Thursday to strip Ed Meek’s name from the Meek School of Journalism and New Media. The academic unit is now known as the School of Journalism and New Media, without a namesake.
It was not immediately clear how soon the letters of his name would be physically removed from the outside of the brick journalism building on the Oxford campus.
Meek apologized and requested his name be removed days after his Sept. 19 Facebook post of two black women in short dresses. He suggested they exemplified problems that threatened the local economy.
“A 3 percent decline in enrollment is nothing compared to what we will see if this continues … and real estate values will plummet as will tax revenues,” Meek wrote. “We all share in the responsibility to protect the values we hold dear that have made Oxford and Ole Miss known nationally.”
Meek led Ole Miss public relations for 37 years, starting in 1964, and has had other publishing businesses. The school was named for Meek after he and his wife donated $5.3 million in 2009.
His Facebook post came in the aftermath of a months-long controversy over efforts to limit underage drinking in Oxford. Some opponents said versions of those regulations were unfairly aimed at a downtown music hall that sometimes hosts performers popular among African-Americans.
The women pictured in Meek’s post were Ole Miss students who said they dressed up after a football game to go out and have fun with friends. Both called his post demeaning and offensive. One of the women, computer science major Mahoghany Jordan of Memphis wrote to the student newspaper, The Daily Mississippian, that Meek’s post “reeks of racist ideology as well as misogyny.”
“As for Ed Meek: one should never use the physical appearance of a person as a measurement of their morality,” Jordan wrote. “I don’t need your apology. In fact, I don’t need anything from the reciprocal guilt you feel after being called out for what you are. The two things that automatically put me at a disadvantage in our society, you’ll never completely understand.”
Ole Miss Chancellor Jeffrey Vitter condemned Meek’s Facebook post within hours. The Ole Miss journalism faculty denounced Meek’s post as “highly offensive” and embarrassing. Three academic councils voted in favor of removing his name from the journalism school, and Vitter recommended that change to the state College Board. Trustees voted for the change Thursday without additional debate.
Some professors have suggested that the university should rename the journalism school for the late African-American reporter and editor Ida B. Wells-Barnett. Born a slave in Mississippi in 1862, she went on to crusade against lynching as a reporter and editor in Memphis. She helped found the National Association for the Advancement of Colored People and pushed for women’s right to vote. Wells-Barnett died in 1931 in Chicago.

As they grow up, many boys want to either be a quarterback who leads his team to a championship or... read more