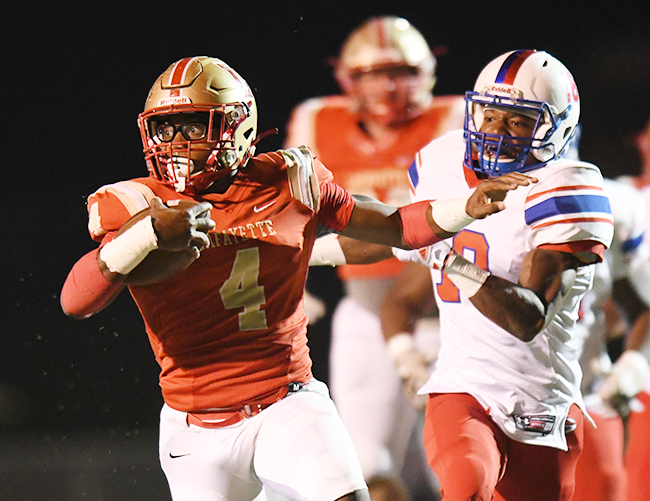 Lafayette cleared the first hurdle last week. Now, they just have to clear the rest.

The Commodores dispensed of Grenada with a 55-21 win last Friday to improve to 3-1 in Region 1-5A and are currently tied with Olive Branch for second in the region standings. With the Conquistadors, Center Hill and Lake Cormorant still remaining on the schedule, the final three weeks of the season are crucial to Lafayette’s postseason chances.

“We’re playing hard, we’re playing fast. It’s been fun to watch these guys the last few weeks,” Lafayette head coach Michael Fair said. “Everything happens for a reason. I don’t believe much in coincidence. We kind of weathered some storms that have kind of put some callouses on some things and made us tougher. It’s kind of got us ready for this. We feel like we can control the future of this football team and we’re taking advantage of it.”

The next hurdle on their schedule is Center Hill this Friday. The Mustangs (5-4, 2-2) host Lafayette (6-2) in what is a pivotal game for both teams.

Center Hill is coming off a 27-17 win over Lewisburg that kept their playoff hopes afloat and has them currently sitting in the fifth spot in the 1-5A standings.

If Lafayette came leave Olive Branch with a win, it might all but lock up a playoff berth for them. The Commodores have wins over three of the bottom four teams in the region (Saltillo, Lewisburg and Grenada). A win over Center Hill would give wins over the entire bottom half of the region for Lafayette.

Getting that win will be a challenge for the Commodores as they will have to find a way to slow down one of the more rare high school offenses, the triple option. Very few teams run the triple option at the collegiate level and it is even less at the high school level. That gives Center Hill an advantage and opposing defenses very little film to scout.

“They do something that nobody on our schedule does and they’re good at it,” Fair said. “They’re relying on the fact that you can’t get your guys ready to stop it in one week and they’re close to being right. We’re going to have to play really fast and we can’t get blocked Friday. We’ve got to play sound football on defense to stop these guys.”

Lafayette had success against the triple option last year, defeating Center Hill 47-14 at home. The Mustangs managed 275 yards on the ground but could only find the end zone twice after the game had gotten away from them.

Two of Lafayette’s final three games of the regular seaosn will be away from the friendly confines of William L. Buford Stadium. The Commdores last home game will be against Olive Branch on Oct. 26. They will wrap up the season at Lake Cormorant on Nov. 2

The Commodores are prepared for life on the road thanks to their non-region schedule. From Aug. 31- Sept. 28 The Commodores did not play at home, with a bye week mixed in.

“Any non-district scheule is supposed to prepare you for this,” Fair said. “We’ve played some talented teams. We’ve come a long way this last month.”