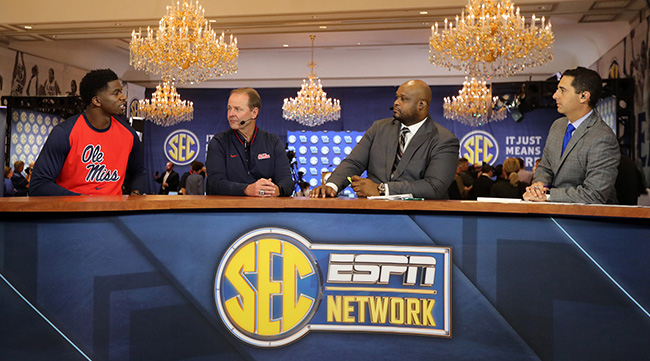 Kermit Davis is closer to getting his first season at Ole Miss underway, but first he had to answer a few more questions. The first-year head coach, along with Terance Davis and Bruce Stevens, traveled to Birmingham for SEC Media Days on Wednesday.

A lot of attention is on Davis as he enters his first season at the helm of a Southeastern Conference team after spending 16 years at Middle Tennessee. The Mississippi native has to constantly remind himself not to get too caught up in the emotion.

“I just think, not to be sped up,” Davis said. “The biggest thing I would tell myself every day as you take the Ole Miss job is you have to live in the moment. You can’t start trying to think about what may happen in four, five or six months. It’s a day-to-day process. Experience matters, no question. When you’re a head coach in the SEC or a player trying to find his way in the SEC, experience matters. The biggest thing is you have to slow the process down, take it day to day and build it that way. If we do it that way we’re going to win games.”

The hiring of Davis has spurned a boost in fan morale towards the program. Ole Miss is holding their inaugural ‘Tipoff Celebration’ today at The Jefferson with Davis and former college basketball coach and current ESPN personality Seth Greenberg. The event is sold out. The Rebels are also bringing back Square Jam tonight — which Greenberg is hosting — at The Square, featuring coaches and players from both the men’s and women’s teams.

“You can feel it. There’s a great vibe about Ole Miss basketball,” Davis said. “There really is. The reception has been unbelievable. Season ticket sales are up. North Mississippi has an unbelievable basketball fan base. For people who haven’t been in those country towns, they love it. All those things are something we want to start. Those are some traditions we’re trying to start to create a buzz in October and November.”

Getting buzz and fans interested in Davis’ first season is one thing, but putting a winning product on the court is the next challenge. With a returning group of starts including Davis and Stevens, there is potential for the Rebels to surprise everyone who voted them to finish last in the SEC this season.

Rebuilding a program is never an easy task, especially one in the SEC. In the first few weeks of practice the players have seen what Davis is bringing to the table and how much experience he brought with him to Oxford.

“It’s helpful that you have a guy that knows a lot about rebuilding,” Terence Davis said. “But, I feel like we’re not even in the rebuilding stage. I feel like Kermit and the rest of his staff are about to do something very special at Ole Miss this year. I say that because we still have great players on our team, and we have an awesome coaching staff. We have players that want to get after it each and every night.”

Ole Miss opens their season on Nov. 10 when they host Western Michigan at 3 p.m.