Oxford hosts Columbus with hopes of a playoff berth 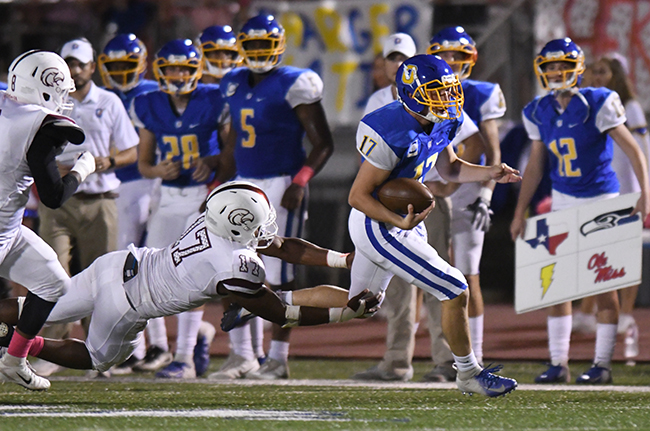 Oxford suffered their first loss in region play last week, but the sky is not falling.

Sitting at 3-1 and tied for second with Tupelo in the region standings still has the Chargers (6-2) in control of everything they want to accomplish. The first goal could be checked off tonight with a win over Columbus (7 p.m., 95.5 FM) and some help from the team that defeated them a week ago.

A Horn Lake victory over Hernando would give the Chargers their first berth into the Class 6A playoffs in program history.

“We’re still in position of being in control of getting a home playoff game,” Oxford head coach Chris Cutcliffe said. “That’s obviously a big goal this season. We know we have a lot out in front of us and it’s got to start this week with Columbus.”

The Chargers are hosting winless Columbus (0-8, 0-4 1-6A) for Homecoming. The record may indicate it could be a good night for the Chargers but Columbus has proven to be a tough out. The Falcons narrowly lost to Tupelo 14-0 on Sept. 28 after the Golden Wave had a slim 7-0 lead most of the game.

In the two teams’ first meeting as region foes last year, Oxford had a tough time putting away Columbus but managed to leave with a 17-7 victory.

“They have a lot of team speed,” Cutcliffe said. “Obvioulsy, the season isn’t what they wanted it to be but I think they are getting better as the season goes on. I think they’re heading in the right direction.”

Columbus is under the guidance of first-year coach Eric Rice.

Jaelan Craddieth runs the Falcons’ offense and has thrown for 577 yards and 5 touchdowns but also has 13 interceptions. Devarkus Ramsey is Columbus’ leading rusher with 490 yards and four touchdowns. Craddieth has also rushed for 126 yards and a score.

The final three weeks are crucial for the Chargers. After Columbus, they hit the road for a game at Hernando next week before wrapping up the regular season at home against Tupelo on Nov. 2.

If the Chargers can handle business the next two weeks, the regular season finale with the Golden Wave could have zero bearing on any postseason scenarios. A far cry from the Oxford’s game at Tupelo last year where they had to win to get into the playoffs.

“I think that’s just the nature of being in 6A,” Cutcliffe said. “Every week I feel like anybody could win any game in our region. I think Region 2 is just as tough. We know we got tough games every week and Columbus is very talented.”

Kossuth sweeps Water Valley in first round of Class…