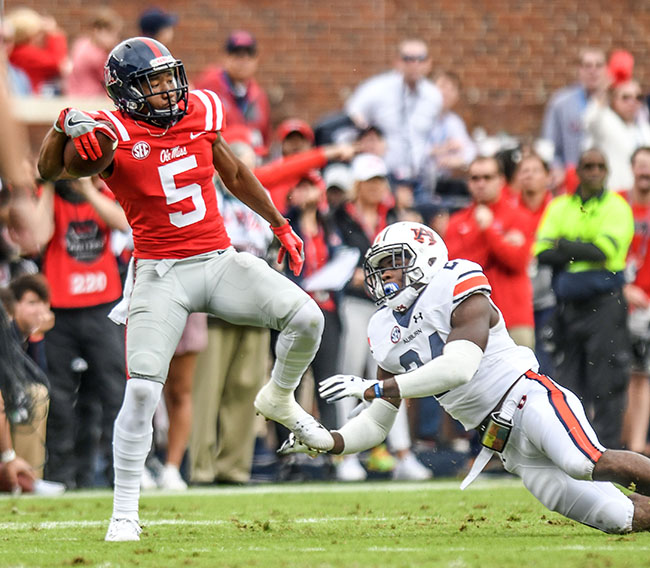 Life in the red zone had not been an area of concern for Ole Miss through their first seven games. They were averaging touchdowns at a clip of over 65 percent of the time the Rebels got inside their opponent’s 20 yard-line (19-for-29).

Saturday’s game against Auburn was another story. The struggles that plagued the Rebels inside the red zone last season returned against the Tigers. They were a perfect 4-for-4 when getting between the goal line and the 20, but only one of those trips resulted in a touchdown.

It was the second time this season the Rebels notched just one touchdown in a game when they got inside the red zone. The other occurrence was against LSU on Sept. 29.

“I think the story of the game was red zone, to me,” Ole Miss head coach Matt Luke said. “We’ve got to find a way to get it in. I know it’s tough against a good defense but it’s our job as coaches to find ways to get it in the end zone.”

The Rebels were gifted scoring opportunities close to the goal line on three different occasions. On three plays throughout the game Auburn’s defensive front was flagged for offsides and then their secondary was hit with a defensive pass interference call.

Quarterback Jordan Ta’amu’s passes to the end zone on the free plays fell incomplete and the ensuing four downs inside Auburn’s 10 only resulted in Luke Logan field goals. The touchdown was with less than three minutes remaining in the game when A.J. Brown hauled in a 12-yard catch.

“(Auburn came with) a lot of pressure,” Ta’amu said. “Most of it was on my part. I had to just protect myself and I think we had a lot of opportunities to score in the red zone. …(I need to start) being smart and protecting myself at all times. Giving my lineman the best way to block those pressures and giving those receivers out there an opportunity to catch the ball. I think we can fix that.”

The beginning of the third quarter was a crucial moment in the game. Auburn started the second half with three straight drives resulting in touchdowns. Ole Miss’ first three drives produced a field goal, a turnover on downs and a punt.

The offenses’ inability to find the end zone and keep up with the Tigers’ torrid pace to the second half all but sealed the Rebels’ loss.

“There are no excuses,” offensive coordinator Phil Longo said. “We had some poor execution in the red zone or in the fringe, just outside the red zone, that stalled some drives. Those are things we just have to get done to get a good start. We felt like we needed a good start against Auburn.”