Ole Miss focusing on ‘self evaluating’ during bye week 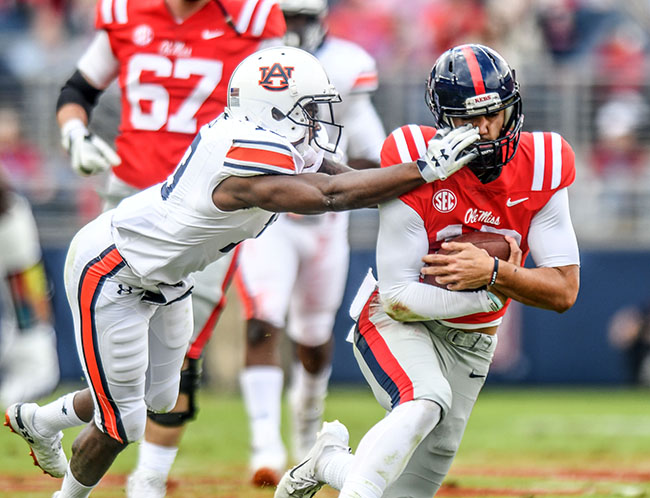 OXFORD — After eight weeks Ole Miss finally has a chance to catch their breath. It comes at the perfect time.

The Rebels are coming off their 31-16 loss to Auburn on Saturday and in dire need of rest, to regroup and take time for self-reflection in several areas.

“Really needed this open date,” Ole Miss head coach Matt Luke said. “Good time for us for self-evaluation. Get some guys healed up for this stretch run. We’ve got four games coming up in 19 days. Very important stretch for us. Big week for us. Looking at things we’ve done well, things we haven’t done well. Also a time for us to get some guys healthy, get some guys back.”

There are multiple areas on both sides of the ball that Luke and his staff will be taking a look at before the Rebels’ game against South Carolina on Nov. 3.

The biggest area offensively is production in the red zone. The Rebels (5-3, 1-3 SEC) were a perfect 4-for-4 inside Auburn’s 20. However, three of those trips resulted in field goals. The only touchdown, scored by A.J. Brown, came in the closing minute of the game.

It was an anomaly on Saturday in relation to how much success the Rebels have had in the red zone. Before Saturday they had scored 19 touchdowns on 29 chances.

“We’re in the office right now evaluating our red zone on the season,” Ole Miss offensive coordinator Phil Longo said during his Monday press conference. “We’re not really earmarking one issue. It’s overall execution and efficiency in the red zone. Obviously it needs to be addressed. We were pretty good in the red zone in a number of different games but I think that’s what hurt us the most offensively against Auburn. I don’t think we’re going to win any games without performing better in the red zone.”

Defensively, the Rebels are faced with trying to pinpoint why they are having the performances they have had against elite defenses in the SEC. Against Auburn, the defense gave up 21 points on three consecutive drives.

Against the top offenses they’ve faced in conference play (Alabama, LSU and Auburn), Ole Miss has allowed an average of 442 yards per game and 46 points per game.

“One thing we came out of the game very disappointed in is lack of physicality,” defensive coordinator Wesley McGriff said. “To win games in this league, in the SEC, you have to play physical. In Saturday’s game we wasn’t as physical as we need to be. We definitely have to address that.”

The defense could benefit from the open date as it pertains to the injury list. Luke noted that defensive back C.J. Miller could return after missing time as well as defensive end Victor Evans.

Against Auburn, defensive tackle Ross Donnelly was injured, but with a weekend off he could return to the field for South Carolina.

Oxford girls’ soccer prepares for second season in 6A…