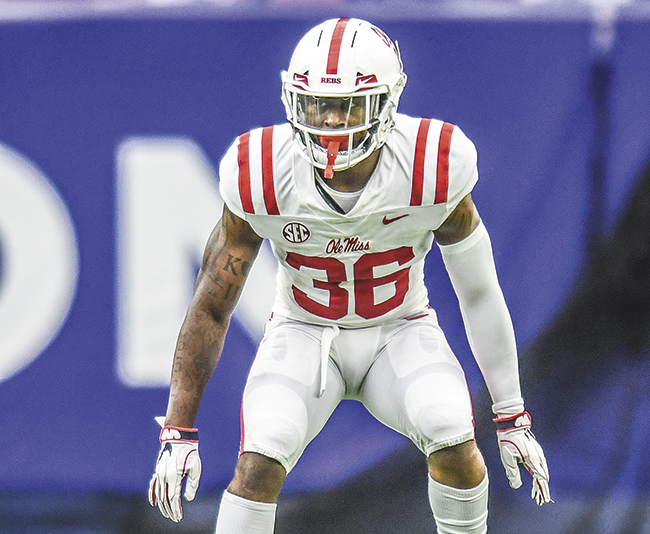 OXFORD — The defensive backfield has been a revolving door this season for Ole Miss, mostly due to multiple season-ending injuries. The one constant has been Zedrick Woods.

The senior safety has managed to avoid the injury bug through the first eight games of the season, but has watched teammates Jaylon Jones, Montrell Custis and C.J. Moore go down around him.

“I just see it as the game of football,” Woods said of the injuries piling up. “Things are going to happen, injuries are going to come. They just have to attack the rehab and the next guy has got to be ready.”

With the injuries it has caused a necessity of younger players moving into starting roles. It even caused Woods to be shifted around. With the injury to Moore, Woods moved from the ROVER position to free safety after the LSU game. Woods is the only player in the defensive backfield that has started every game this season.

When Jones and Custis went down, Armani Linton and Tylan Knight moved from running back to defense. With so many changes, Woods has been looked to as the player to help stabilize a fluid defensive roster.

“We always have to have the next man prepared, so I take it as my responsibility to make sure they know it well enough,” Woods said. “I’m the old guy back there, so it’s my job to make sure we go into a game where they don’t know something. We pride ourselves on being prepared because you never know what can happen.”

On the current Ole Miss roster, Woods has played the most games (45) and is third in career starts (36).

WOULLARD BENEFITS
The depth of the running backs room has helped ease the sting of losing Knight to defense. One player in particular has taken advantage of the switch, Isaiah Woullard. The true freshman out of Hattiesburg has moved up to No. 2 on the depth chart behind Scottie Phillips. Phillips has taken most of the workload but Woullard has provided key snaps when Phillips needs a rest.

“(Losing Knight) has allowed Isaiah Woullard to get more opportunities and develop more and get some more game reps,” Ole Miss running backs coach Derrick Nix said. “I think (Woullard
is) a lot more confident. You can see he has more of a determined style of run. He doesn’t how many carries he’ll get or how many plays, so he’s making the most of them.”

Woullard has played in every game this season and has 166 yards and 3 touchdowns on 35 carries. He has also caught 4 passes for 30 yards.