Lafayette hosts No. 8 Olive Branch as race for the No. 2 seed heats up 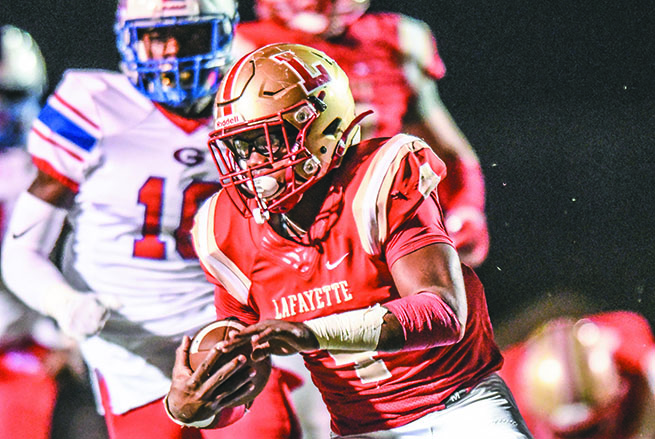 OXFORD — Every season, every game is important but there are always a couple of games on the schedule that carry a little more significance. For Lafayette, this week is one of those games.

(Olive Branch) has played really well,” Lafayette head coach Michael Fair said. “Their region schedule has kind of mirrored ours. A one-point loss to West Point, that’s the only blemish on it. It’s a big game. Without saying it, I think our kids have been looking forward to it. I think our staff does a good job of not letting them look ahead. We take it one day at a time.”

With both teams suffering losses to No. 6 West Point already, Friday’s game will put the winner in sole command of second place in the region standings and for that all-important No. 2 seed in the playoffs. After missing out on the postseason altogether a year ago, the Commodores want nothing more than to be able to play their first Class 5A playoff game at home on Nov. 9.

To do so, they must finishing the final two weeks of the regular season a perfect 2-0 against Olive Branch (8-1, 4-1 Region 1-5A) and at Lake Cormorant next week.

Since losing to Oxford and West Point by a combined three points, the Commodores have gone 4-0 and outscored their opponents 172-48. The defense is holding opponents to 12 points per game.

Personnel and other changes have also aided in their success over the past month.

“We moved some guys on our defensive front,” Fair said. “On offense we just kind of started getting back true to who we were. …There’s just so many little things that go into it. There’s no one big thing that we said ‘OK, lets just stop this leak by putting our finger in this hole.’ It wasn’t one of those. It was ‘alright, lets get back to fundamentals and see how we’ve lost these two close games.”

Olive Branch responded to their 34-33 loss to West Point by defeating Lake Cormorant 17-0 last week, keeping themselves in contention for a home playoff game.

Last year, Lafayette traveled to Olive Branch and jumped out to an early lead over the Conquistadors. But Mother Nature and a relentless Olive Branch fought their way back for a 20-9 victory.

“We’ve got big plans and big goals here, just like Olive Branch does,” Fair said. “They’ve got the same goals that we have. It’s how you get your guys to perform on Friday nights that is the difference. We spend more time on that than we do anything in the future that’s coming.”

The Lafayette defense could get a big boost with linebacker Eric Jeffries potentially returning from injury. Jeffries has been dealing with a stinger the past couple weeks and is a game time decision.

Lafayette girls start journey back to Jackson as season…