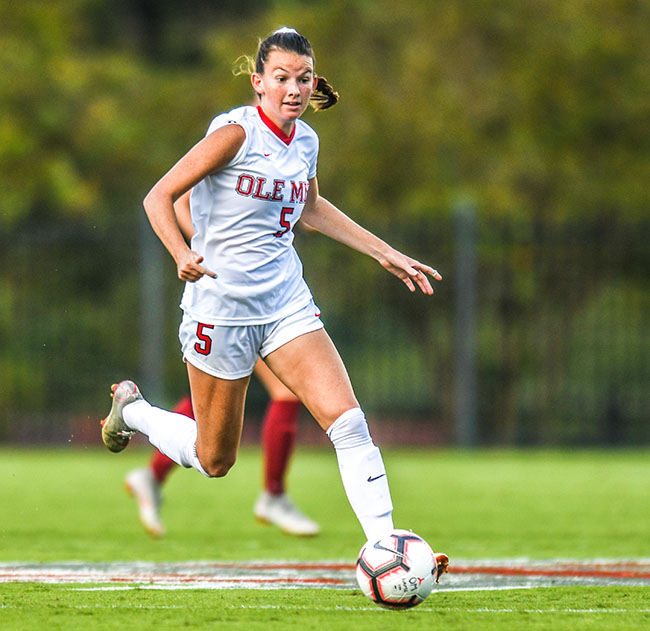 Ole Miss’ CeCe Kizer (5) dribbles upfield against Arkansas at the Ole Miss Soccer Stadium in Oxford, Miss. on Sunday, October 7, 2018. Kizer has been selected First Team All-SEC for the third-time in her career, becoming the third Rebel in history to earn first team honors three times.

OXFORD — If Ole Miss wants to return to the NCAA Tournament this season, a lot will be dictated by how well they perform at this week’s SEC Tournament. The Rebels open up the yearly conference tournament at Orange Beach, Ala. tonight against Arkansas.

The Rebels (12-6-1) and Razorbacks cap the day’s four matches in the quarterfinal round at 7:30 p.m. CT on SEC Network. The Rebels earned the No. 5 seed and a first round bye after handing No. 1 seed Vanderbilt their only loss in conference last Thursday with a 1-0 victory.

The regular season was concluded with the Rebels winning their final three matches and four of their last five, finishing with 19 points. It is the second most points recorded since earning 21 points during the 2015 season.

“It’s an exciting time of year,” Ole Miss head coach Matt Mott said after their win over Vanderbilt. “I’m excited to get down to the SEC Tournament. We have a good seed and it’s time to make some noise.”

Heading into the conference tournament, Ole Miss is sitting squarely on the NCAA Tournament bubble. With an RPI of 52, the Rebels could benefit with a win over Arkansas tonight and reach the semifinals on Thursday. With four wins over teams in the Top-25 of the RPI (Vanderbilt, Arkansas, Mississippi State, Auburn) it bolsters the Rebels’ resume over some other bubble teams.

“We are probably on the good side of the bubble because we have (four) top-25 wins and a top-25 draw, which is as good as anybody on the bubble. We have a bad loss early in the season to Connecticut, which is keeping our RPI a little higher than it should be in my opinion. But, if we can get a game down at (Orange Beach) we will be in a really good spot.”

A reason the Rebels finished the regular season so strong was the play of freshman goalkeeper Morgan McAslan. After starting goalkeeper Marnie Merritt went down with a season-ending knee injury earlier this month, McAslan stepped in for some of the most crucial minutes of her young career.

In five games played, McAslan has started in the last four. She’s allowed four goals but has 19 saves.

“She has done a really good job of dealing with everything,” Mott said of McAslan. “I think we have stepped up defensively and limited chances at our goal. I think our total team defending has improved, which has made it easier for Morgan. She is confident and playing really well.”